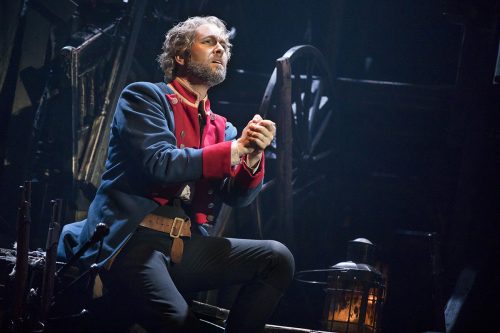 The June Rebellion of 1832 lasted all of two days, a short-lived revolution in Paris that had little lasting effect on the world of French politics. Its cultural impact has been much farther-reaching, with the chaos and bloodshed of the barricades on the city streets a powerful and moving feature in Cameron Mackintosh’s production of “Les Miserables,” now playing at the National Theatre.

This musical, based on the novel by Victor Hugo, tells the story of Jean Valjean (Nick Cartell), a man imprisoned for nearly twenty years after stealing a loaf of bread to feed his starving family. Once he leaves prison, he discovers the outside world is just as hostile as the brutal jail he’s just departed, with people unwilling to offer kindness to a felon. The only merciful figure is the Bishop of Digne (Monte J. Howell), who gives him a place to sleep, and even rescues him with a lie when Valjean steals his silver and gets caught trying to leave the city. The Bishop directs him to use his life wisely, as he has bought Valjean’s “soul for God.”

…epic and thrilling and very moving.

Some years later, Valjean has reinvented himself as the benevolent mayor of a French town, a prominent businessman. He is witness to a dispute between Fantine (Melissa Mitchell) and the other employees in his factory that results in Fantine being cast out for having a child out of wedlock, a daughter she’s entrusted to the Thenardiers (Allison Guinn and J. Anthony Crane), a sly innkeeper couple who only care about enriching themselves. Fantine, desperate to keep her daughter alive, falls into despair–selling her hair, her locket, and eventually her own body. She is arrested while attacking a man who is harassing her, and Valjean, recognizing her as the woman from the factory, promises to care for her daughter.

But Valjean is being dogged by Javert (Andrew Love), a policeman who has sworn to hunt him down for violating his parole. Javert is unwavering in his conviction, determined to see Valjean in prison again, regardless of Valjean’s own behavior. The chase between the two men endures for decades, stretching across the length of the show, and into the June Rebellion. Valjean’s adoptive daughter, Cosette (Jullian Butler) is in love with Marius (Joshua Grosso), a young revolutionary from the ABC Society led by the charismatic and idealistic Enjolras (Matt Singledecker). Eponine (Phoenix Best) is also in love with Marius, and as the eve of the rebellion mounts, all these elements head toward a bold and moving conclusion.

Jean Valjean is one of the most famous and probably one of the most vocally difficult roles in modern musical theatre. Throughout the play, the character is young and old, bitter and hopeful, angry and resigned. He is a man who goes from the youthful rage of an unloved convict to the solemnity of a well-respected businessman to the calm of those about to die–all in the space of roughly 150 minutes. The part requires nothing less than brilliance–and, fortunately, Cartell delivers. His apparent youth at the beginning of the show is no barrier whatsoever to his transformation, later, into the older man who begs God to let Marius live: “He’s like the son I might have known, if God had granted me a son…And I am old, and will be gone.” Equally capable of both soaring and soft vocals, Cartell is a treasure to watch, handling some of the best songs of the show — “Bring Him Home,” “Who Am I,” the lead on “One Day More” — with a ferocious energy and absolute devotion to the role.

Mitchell’s Fantine has a remarkable amount of poise. The clear simplicity of her rendition of “I Dreamed A Dream”–a ballad popularized by Susan Boyle in her “Britain’s Got Talent” appearance–lends it a kind of sad gravity that can be absent from more expansive versions of the song. She retains a sweetness, even in the character’s desperation, that her death scene, in “Come to Me,” is truly devastating.

One of the more intimate scenes in a musical that functions on such a grand scale is the duet between Grosso and Best. Best’s Eponine is something of a figure on the margins, hiding in corners, singing soliloquies such as “On My Own,” but her persona is a little bolder, a little more flirtatious, than the wallflower waif the role can so often become. In “A Little Fall of Rain,” we see her resigned finally to her fate, that beautiful, strong voice falling into plaintive notes. And Grosso shows a capacity for something beyond the dreamy earnestness that dominates Marius, a capacity that comes to fruition in his major solo, “Empty Chairs at Empty Tables.”

For the Dec. 21 performance, the role of Javert was played by Andrew Love, who typically understudies the part. That being said, he did a great job. His Javert was downright terrifying in places, intimidating, bold, and aggressive. But he showed nuance, especially in Javert’s main songs: “Stars” and the song typically referred to as “Javert’s Suicide,” when the character is unable to reconcile his life’s mission with Valjean’s goodness.

Unlike the revolving stage of some productions, the National Theatre’s “Les Miz” relies on enormous wooden set pieces, moved around the stage, and a screen that projects images–including a video of a tunnel as Valjean drags Marius through the sewers. Frequently throughout the show, the stage was shrouded in mist, with light from on high breaking through at opportune moments, lending an almost otherworldly air to the production. From the first moment when the curtains rose on the chain gang, rowing oars on a ship, it felt truly authentic.

The novel Les Miserables can run to nearly 1500 pages in some unabridged copies, and the musical is also fairly long, with a runtime of just under 3 hours, including intermission. But it never feels long–the grand scale of “Les Miserables” is such that it grips rather than bores, sweeping the audience up in the story of one man’s redemption. The June Rebellion may be a footnote in history but it’s not insignificant to Jean Valjean, or to the many characters who die upon the barricades. And that, really, is the true charm of this musical–it takes something as intimate as one man’s life, as the scene behind the barricades in a short-lived rebellion, and makes it something epic and thrilling and very moving.

“Les Miserables” is playing at the National Theatre through Jan. 7. For more information, click here.