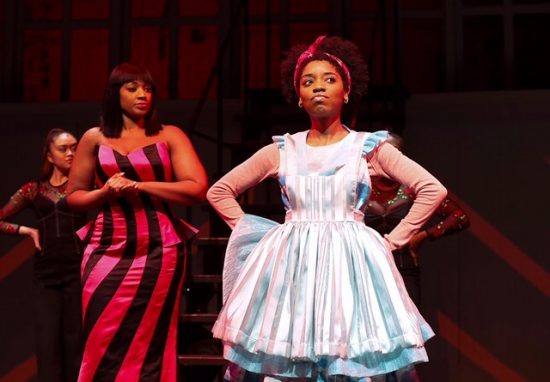 Baltimore is no stranger to magical events in local theatres.  On any given weekend night there is some company of wildly talented folks acting, singing and dancing their little hearts out.  But the bar has been set yet higher by the wonderful company now performing at the newly renovated Baltimore Center Stage.  “Lookingglass Alice,” adapted by David Catlin from the works of Lewis Carroll, is in the house.

This delightful re-visiting of “Alice’s Adventures in Wonderland” imagines our fearless little heroine as seen through a much more contemporary mirror.  This little girl wants nothing more than to be a queen.  She has a friend by the name of Charles Dodgson (the real name of Lewis Carroll, author of the original story). One night, while wishing with all her might and staring into a large mirror, she suddenly finds herself on the other side of it!  In this fantastical new land, she first encounters The Cheshire Cat, then a host of other familiar characters in Wonderland.  As her journey progresses it becomes one of self-actualization and awareness in a tale told through little vignettes, some great musical numbers, and excellent (and occasionally acrobatic) dances until she finally reaches her goal.

It is such a treat to see a production helmed so well by a director of Jeremy B. Cohen’s caliber.  A consummate professional, his sure hand is on display in each scene of this 90-minute romp. Deftly paced and beautifully executed. Cohen has assembled a great team to help him realize his vision.

Lindsay Jones has assembled some pitch-perfect songs and arrangements that Jose C. Simbulan directs beautifully.  Rennie Harris, the award-winning choreographer perfectly blends street dance and Broadway and every move added to the total of the show.  And Caite Hevner does an outstanding job with some inspired projections that add a great deal to the minimalist set by Tim Mackabee. David Burdick has a great time with the costumes that are much more than meet the eye.  Many in the cast play multiple parts and some of the costume changes happen so quickly (how do they get those pumps on and off so fast??) that it is only through careful design and construction that they are able to pull them off.  And on.  And off again.

Jessica Bennett and Sensei Silab form the more than competent ensemble and both have admirable voices.

Christopher Ramirez as Dodgson is a little creepy but to great effect. As Tweedle Dum he is wonderfully urban and funny, and as the White Queen (pun intended) he is all that and a bag of chips, gurl.   His voice is pure Broadway and he is an exceptionally talented actor to boot.

Patrice Covington is another Patti LaBelle with her own distinctive style and vocalizations.  As the Red Queen, she is fierce and when she sings “Confident,” she is fabulous.  She struts like a queen, sings like a siren and is totally captivating.  When she commands her minions with ‘Off with her head!’, I had to put my hands protectively around my own neck, so powerful was her voice. She does double duty as the TitMouse and Tweedle Dee.

Garrett Turner is a kinetic ball of energy as the White Rabbit. – with white dreads, thank you very much.  He fidgets and frets and jumps and slides and commands attention to the point that I was afraid to blink lest I miss one gorgeous move.  He handles the choreography and the songs like a seasoned pro and, have mercy, the guy is easy on the eyes.  He also appears as the White Knight and the March Hare.

David Darrow as the Cheshire Cat/Mad Hatter/Caterpillar rather sneaks up on you with the breadth of his talent.  He plays a nice guitar, can stretch as languidly as a Siamese cat, can climb a rope like a trapeze artist, sing like a rock star and make it all look so effortless.

Markita Prescott as Alice is as winsome and delightful in the role as she can be.  Truly, this girl has something special.  Her singing voice can go from 0 to 60 in a single note, she has a physicality that is impressive, and she is nothing short of adorable.  I have no idea whether she is 12 or 25, but she plays the little girl who wants to be queen with such believability that you can’t help but root for her and have no doubt that she’ll get everything she wants.