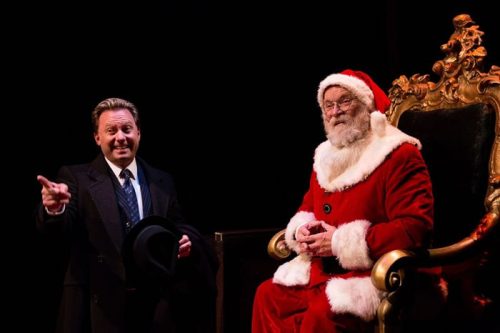 Toby’s Dinner Theatre, a popular Maryland venue with a buffet and a theatre-in-the-round, is known for involving its audiences in its shows. Actors double as servers, interacting with audience members before the show and during intermission. The intimate setting allows those in attendance to sit at the very edge of the stage, sometimes even moving their feet so as not to interrupt a dance number. It’s immersive theatre at its best.

…Toby’s “Miracle on 34th Street: The Musical” is a Christmas classic…It’s immersive theatre at its best.

Set in the 1940s, “Miracle on 34th Street” tells the story of Susan Walker (Camden Lippert), the precocious young daughter of Macy’s Department Store executive Doris Walker (an engaging Heather Marie Beck) has been raised to be independent and logical. Told never to believe in anything she can’t see, Susan dismisses the idea of Santa Claus. When her next-door neighbor Fred Gaily (a fun-loving Jeffrey Shankle) takes her to the Macy’s Thanksgiving Day Parade to see Santa Claus, Susan meets the mysterious and jovial Kris Kringle (Robert John Biedermann), hired by Macy’s to replace their drunk Santa-impersonator. As Kris tries to teach those around him the true meaning of Christmas, he gets into trouble with the New York court system—trouble that can only be overcome with love, faith, and a little Christmas spirit.

Although a cute show, “Miracle on 34th Street” is slightly outdated, which puts pressure on the actors to embrace the kitsch without overacting. Nevertheless, there were certainly standout performances. Despite her limited role, Santina Maiolatesi as Miss Crookshank gave one of the best performances of the night. She nailed the New York transatlantic accent and committed completely to her character. Additionally, when audience members blocked her exit right as she was supposed to run offstage, Maiolatesi seamlessly adjusted and did not break character, even as she had to cross the stage to another exit.

In addition to Maiolatesi’s talent, Tommy Malek as Marvin Shellhammer brought excellent energy to his role and carried the scenes that lagged. Finally, Biedermann as Kringle and David Bosley-Reynolds as the Judge both embraced the physicality of their roles with Bosley-Reynolds communicating mainly through facial expressions and Biedermann nimbly jumping off boxes and skipping around the stage.

Meredith Willson, best known for “The Music Man,” wrote the book, lyrics, and music for “Miracle on 34th Street.” Though the songs were mostly forgettable, the cast and live orchestra made the most of what they were given. Russell Sunday as R.H. Macy and Heather Marie Beck as Doris Walker had quite a few strong belts. In one particularly impressive moment, the cast grabbed clapper-less bells and pretended to ring them, using their voices to sing the notes that their bells would have produced.

Yet, the most impressive part of the performance was Lawrence B. Munsey’s costume design. He perfected the 1940’s period costumes down to Doris Walker’s hat pin. Each character had multiple costumes as well as accessories and various layers of winter outerwear, but it was all managed seamlessly. The costume design was meticulous and detail-oriented and brought the show to life in a way that nothing else could.

Directed by Shawn Kettering with choreography by Mark Minnick, Toby’s “Miracle on 34th Street: The Musical” is a Christmas classic. The performance is nostalgic as only a holiday show can be. If you and your family want a heartwarming reminder of the reason for the season, Toby’s might just deliver.

Advisory: Strobe lights and fog machines are used in this production.