Theatre Review: ‘Private Confessions’ by The National Theater of Norway and Rikstreatret at The Kennedy Center 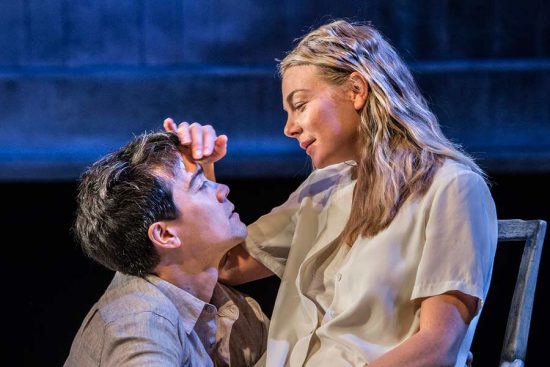 In an effort to celebrate the life of accomplished Swedish director Ingmar Bergman (1918-2007), the John F. Kennedy Center for the Performing Arts has programmed three of Bergman’s most prolific works into their 2017-2018 season; one of which being “Private Confessions,” an adaptation of Bergman’s 1996 film of the same name.

Bergman’s deeply personal and autobiographical “Private Confessions” tells of a passionate, although fleeting, affair his mother had (only revealed to Bergman after her death within the pages of her personal diary) with a young divinity student eleven years her junior. The scenes are arranged in no particular order and details regarding the confession are gradually revealed, one by one, eventually exposing the true nature of the affair.

Directed by Bergman’s favorite actress (and director of the 1996 film), Liv Ullmann, “Private Confessions” opens with Bergman’s mother, Anna (Marte Engebrigtsen) confessing her affair with young divinity student Tomas (Morten Svartveit) to her minister Jacob (Bjørn Skagestad). Although it seems that Anna has been raised in church, one doesn’t get the impression that she has much of a spiritual life. Weeks later she confesses to her husband Henrik (Mattis Herman Nyquist), partially due minister Jacob’s insistence, but most likely due to the unwavering guilt that has slowly but surely become unbearable for Anna to conceal.

I’d like to applaud Nyquist here for his highly believable portrayal of a man with a broken heart. Sarcastic at times, irreparably broken at others, his portrayal of Henrik was certainly a highlight of the evening (he even managed to eke out a few chuckles from the audience amidst this tangled web of deception, deceit, and heartbreak). We are then transported to an earlier time; a time that reveals to audience members, and Anna herself, that all that glitters isn’t gold.

There are quite a few twists and turns embedded throughout this real-life tale of secrecy, infidelity, and guilt and, although this is Bergman’s fictionalized account of his mothers deepest and darkest secrets, it’s incredibly easy to see bits and pieces of our own truths through Anna’s eyes. There are no rainbows and unicorns here; this production seeks to reveal one person’s quest for meaning in her own life in addition to exposing the, also very real, consequences of said quest.

“Private Confessions” is a stark reminder that what’s done in the dark always comes to light – maybe we should think twice about doing that thing we’d be ashamed of if even a modicum of light was shone on it.

Running Time: Two hours and forty-five minutes with one intermission.

“Private Confessions” runs through December 9, 2017 at the John F. Kennedy Center for the Performing Arts. For tickets and more information, click here.