Theatre Review: ‘The Book of Will’ at Round House Theatre 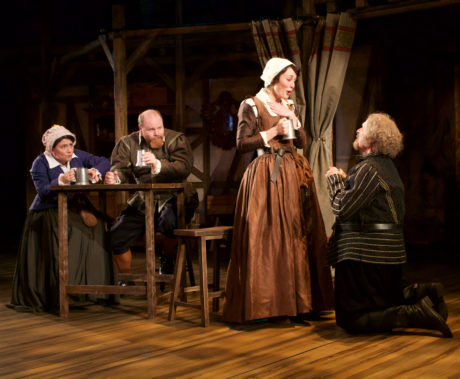 To appreciate what Lauren Gunderson has accomplished with her latest historical play, “The Book of Will,” it pays to leaf through your Norton Facsimile of the First Folio, as the first legitimate collected plays of William Shakespeare are otherwise known.

[“You do have the Norton Facsimile, don’t you? Right next to your Bible?
If not, get busy with that Christmas shopping…”]

I recommend the opening pages because they contain Gunderson’s action in a nutshell; you are immediately met with a rather hideous, balding fellow with a pitiful excuse for whiskers and a neck ruff that looks more like a guillotine blade. That, plus the sagging bedroom eyes, gives you a rather sorry impression of the world’s greatest playwright. Then comes a fawning dedication to the Earls of Pembroke and Montgomery (whoever they were), and an Introduction “To the great Variety of Readers” penned by the book’s compilers, John Heminges and Henry Condell.

‘The Book of Will’ is stand-out entertainment…

You are likely to smell a rat when you note that they’ve barely started writing before they command you, the browser in the stacks, to “buy it first.” So much for great literature; we’re talking business here, strictly business.

Then comes a long-winded poem written by England’s first Poet Laureate, Ben Jonson, who praises his dead colleague for succeeding against the odds, because – unlike Jonson – Shakespeare didn’t have a proper university education: “small Latine, and lesse Greeke.”

From the strangeness of this now-ancient tome’s first act comes “The Book of Will,” a truly compelling story about a love for the theatre, topped off by the utter chaos of the publishing trade in early 1600’s London.

For her latest project Gunderson has, with her usual unerring eye for detail, done a deep-dive into the minutiae, and the tremendous challenges faced by Heminges and Condell as they attempted to publish authentic versions of as many plays as they could get their hands on.

Round House Artistic director Ryan Rillette, known primarily for his work with new playwrights (like Gunderson) has done the Bard proud. The cast, led by local stalwart Todd Scofield as John Heminges, and Maboud Ebrahimzadeh as Henry Condell, takes you on a briskly-paced, highly entertaining journey of loss, rediscovery, recovery, skullduggery, with more than a few pints thrown in to keep the skids greased.

Scofield’s Heminges, the owner of a pub adjoining the Globe Theatre, projects the calm chumminess that endears one to actors and the acting profession, while Ebrahimzadeh’s Condell offers a more fiery persona. The remnants of Shakespeare’s old company are rounded out by the inimitable Mitchell Hébert, who has not one but two star turns here – first as Richard Burbage, Shakespeare’s leading actor (and creator of the role of Hamlet), and second as the pompous playwright and poet, Ben Jonson. Hébert makes a fine art of scenery-chewing, and his tirades—motivated in both cases by professional jealousy—are a reminder that sometimes it pays to let the actor turn it up to 11; a Hébert in high comic dudgeon is not to be missed.

Gunderson rose to fame through her plays about assertive, whip-smart women; and although there is less historical material for her to work with here (women were not allowed to perform onstage in Shakespeare’s day) she still gives the actresses opportunities to turn in memorable performances. Marni Penning, as Rebecca Heminges, is the passionate driver of Heminges’ quest to assemble the plays, and returns later as Anne Hathaway, Shakespeare’s widow, in a truly touching final sequence when Heminges and Condell finally bring her the finished work. Kimberly Gilbert, meanwhile, holds her own as Elizabeth Condell, and fully embodies the allure and mystery of Emilia Bassano Lanier, the reputed ‘Dark Lady’ who inspired Shakeseare’s sonnets. And Katie Kleiger’s performance as the barmaid Alice Heminges (John and Rebecca’s daughter) has the discreet touch of comic genius, as she dismisses amorous suitors of all ages with her deft one-liners.

Paige Hathaway’s 2-tiered scenic design enables us transition with lightning speed between Heminges’ alehouse and the private chambers of assorted characters, as well as the cramped office of the Globe, where we encounter the harried copying staff. One of the more effective comic sequences centers on the humble ministrations of Ralph Crane, one of those desk-jockeys whose name is legion, and without whom absolutely nothing ever gets done. Christopher Michael Richardson nails the comic sensibility of Crane’s character, even as he switches from one role to the next.

Matthew M. Nielson has composed some truly delightful, Renaissance-themed incidental music, and Kendra Rai’s costumes and elaborate wigs (for both the men and women) are period-perfect. Kasey Hendricks, meanwhile, deserves a special shout-out for the overtime effort put into assembling the materials necessary to reveal the process of traditional bookmaking. One of the most amusing sequences here is a pantomime, set to Nielson’s sprightly airs, as the printers assemble, fold and stack the quires (clusters of 4-5 sheets, folded into discreet units) that will eventually be sewn together and bound to make the First Folio. This silent sequence brings home the human element in book production, something which we in the digital age have nearly completely forgotten.

“The Book of Will” is stand-out entertainment, and is an excellent way to introduce young people to what I might call “the business of the business” – it’s a reminder that for all the hoopla Shakespeare excites today, his status as a writer was marginal at best, and as Gunderson points out it was near miraculous that as many of his plays have survived for us to enjoy today.

Performances of “The Book of Will” run through December 25 at the Roundhouse Theatre Bethesda, 4545 East-West Highway, Bethesda, MD. Tickets can be ordered by calling 240-644-1100, or visit online.