Theatre Review: ‘The Future of Wellbeing’ at Strathmore 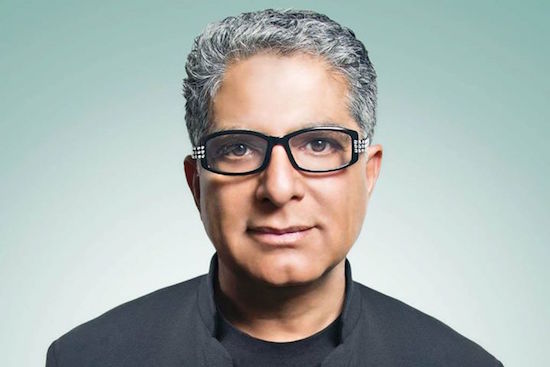 Did you know that 65 percent of our DNA is the same as a banana’s? Talk about an uncanny statistic to start off a Tuesday evening.

In two hours, Deepak Chopra, licensed physician, best-selling author and top influential thinker in medicine, captured the audience at the Strathmore with his humor-filled descriptions of how we, as individuals and humanity as a whole, fit into the history of evolution and magnificence called the universe.

So much was covered in so little time, but Chopra left the audience with a few questions to keep curiosities peaked and discoveries sought out post-lecture.

Kicking off his lecture, Chopra asked the audience to turn their attention to a video. Exploring the moment of conception to birth, the visuals on the screen explained the varying rates at which cells multiplied over the course of nine months. “All of evolution is remembered during pregnancy,” Chopra summarized. By comparing the development of other physical forms to that of humans, Chopra connected the dots for those who may not have been fully immersed or interested in biology class a long, long time ago.

His ability to poke fun at our naming conventions and tendency to overcomplicate simple concepts drew a hearty laughter out of the attendees, one which echoed beautifully around the Strathmore. A few standout moments included the decision to name ourselves, out of eight other human species, homo sapiens, or “the wise ones”; the overused, inexcusable explanation of not having enough time, or as Chopra called it, “time sickness”; and the exaggerated pronunciation of scientific terms that have already disappeared from my memory.

One piece of advice Chopra repeated from beginning to end was the need to think of one’s body as a verb. There is no sense in referencing the body as a noun when it is constantly changing, each second of every year. It will never be what it once was, but everyone does have the ability to influence what it becomes next. As he simply put it, “You are not in the body. The body is in you.”

Somehow, very slowly, it became much easier to grasp that only one percent of human bodies can be genetically considered “human.” Be it a piece of fruit, a family member or a feeling emitted from a stranger walking by us, a body acquires everything it comes into contact with in an environment. This particular point brought out a lot of head nodding and “a-ha” sounds from the audience.

While Chopra outlined in detail his six pillars to living a fuller life, chock full of study-based proof and suggestions, what resonated most was trying one of these pillars out as an audience. For countless minutes, he helped everyone present reframe their understanding of awareness through a gentle, guided meditation.

So much was covered in so little time, but Chopra left the audience with a few questions to keep curiosities peaked and discoveries sought out post-lecture. “Am I aware?”, “Is this belief that I hold true?” and the never-ending question, “Why?”

Running Time: 120 minutes with no intermission.

Tickets and performance schedules for The Music Center at Strathmore can be found at www.strathmore.org. To see where Deepak Chopra is headed next, click here.