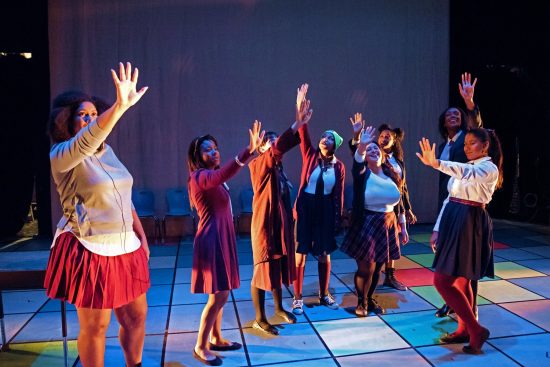 The cast of ‘The Goodies’ at Iron Crow Theatre. Photo by Rob Clatterbuck.

Conceptualized and directed by Susan Stroupe, “The Goodies” features an all female cast of color who re-tells the story of the Salem Witch Trials through the lens of modern day America.

“We often associate the Puritans only with their theology, but in reality their philosophy of work and behavior is so close to our current desire to prove we are living a good life, that some phrases in the primary sources of our research could have been written by contemporary wellness bloggers,” said director Susan Stroupe. “We discovered that the root of these events, stemmed in many ways from the complex pain of teenage girls wanting to have a voice in their society and being censored by authority ﬁgures. So we started from a place of believing those girls. We found a deep kinship between those teenage girls of Salem and teenage girls of color in our own time, and grew this story from that seed.”

Performed by a powerful ensemble, Iron Crow’s “The Goodies” is cutting-edge and provocative storytelling at its best.

The story is centered around eight female students of color who attend John Every High School.  It’s difficult for the students to focus on academics because they are constantly being subjected to racism in one form or another. After a plethora of social media backlash, the school principal recruits the students to identify and eliminate any and all racist teachers.

A couple of outstanding performances I won’t soon forget include Rachel Reckling as Jada, the cynical Student Council President and Elizabeth Ung as Xinyi, the daughter of Chinese immigrants. I was also impressed with the nuances of Aladrian Wetzel’s voice and physical posture as she transitioned from being Sam to Mr. Johnson.

To the credit of the director and the ensemble, the audience feels the struggle of each of the individual student’s failing to meet the expectation presented by their friends, family, and most of all, society.  The teenage angst of whether receiving acceptance by their peers as a new student or receipt of an academic acceptance letter is felt from each actress.  The dual role as a faculty member shows the struggle adults have in building rapport with students.

A particular moment of the play that really struck a cord occurred when the students reacted to a television report regarding the teachers.  I won’t be giving away what happens, but I can tell you it’s a powerful scene.

Performed by a powerful ensemble, Iron Crow’s “The Goodies” is cutting-edge and provocative storytelling at its best.  The play’s heartfelt and sincere message forces oneself to be more aware of how we treat one another.  The writing of this piece, credited to the entire cast, is a perfect starting place to consider how we can create a better future for all.  Isn’t that what good theatre is all about?

Running Time: Two hours and 20 minutes, with one 10-minute intermission.

Advisory: Please note that “The Goodies” contains text and theatrical images that evoke and/or depict emotional, verbal, and micro aggressive violence against people of color in a school setting. “The Goodies” explores mature themes and contains adult language. “The Goodies” may not be suitable for patrons under the age of 15.

“The Goodies: A New Devised Piece” is presented by the Iron Crow Theatre and runs through Sunday December 10th at the Baltimore Theatre Project. For more information, visit online.