Theatre Review: ‘The Last Night of Ballyhoo’ at Theater J 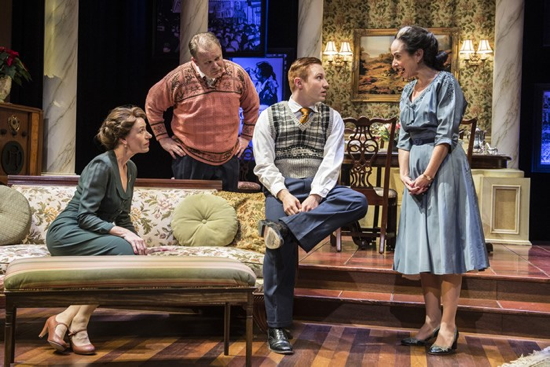 If nothing else, “The Last Night of Ballyhoo” exposes anti-Semitism among the South’s elite Jewish families; a war of German-Jews and “the other kind” from “east of the Elbe.” This reality provides most of the dramatic tension throughout the show, set in 1939, because the news is full of Hitler and the possibility of war while the Jews of Atlanta (at least those that matter and the ones who don’t live at the “tacky end” of their streets) are concerned with a formal dance that is the highlight of their social season. And hand-in-hand with that disconnect is the release of “Gone With the Wind” and its obvious parallels.

…Shayna Blass gets a rare chance to perform in a comedic role, and…she has a knack for physical comedy.

The show has some very funny moments, including a hilarious sight gag based on the green drapes Scarlett O’Hara used to create a new outfit in the movie. Other parts were not as successful; both love story subplots were so obvious there was no tension, and there wasn’t much depth to the characters at any time. The girls were predictably the brain and the beauty, between the daughters, and the shrew and the scatterbrain between the mothers, and the overgrown frat boy and earnest, hard-working young man among the three men. Only the uncle’s character (Adolph Freitag) had a few minutes of unexpected insight.

The story revolves around the hopes of a wealthy Jewish family that owns a bedsprings factory. Adolph Freitag (Sasha Olinick) is a life-long bachelor who is the head of the factory, and of the family. The extended family living together in the house on Habersham Road include his widowed sister Boo Levy (Susan Rome) and her daughter Lala Lavey (Shayna Blass), his widowed sister-in-law Reba Freitag (Julie-Ann Elliott) and her daughter, Sunny Freitag (Madeline Rose Burrows). Sunny is a college student at Wellesley College, while Lala fled home after one semester at the University of Michigan, because of an unnamed mistake involving a sorority. Her confidence is shattered and she is pinning all of her hopes on the future on the formal dance—Last Night at Ballyhoo. In the meantime, Uncle Adolph introduces a new employee named Joe Farkas (Zack Powell). He is from “east of the Elbe” and brings the viewpoint of a far wider world into this rather hermetic household. The final character, Peachy Weil (Josh Adams), hails from Louisiana and is the scion of a very wealthy, social Jewish family. Both Lala and Reba ultimately pin all their hopes for Lala’s future on Peachy.

But before getting there, Lala throws herself, in her own rather push-pull way, at Joe, who, predictably, only has eyes for Sunny. Before the two young couples get things sorted out, a few secrets are blurted out and some old grievances aired. As Lala, Shayna Blass gets a rare chance to perform in a comedic role, and it turns out she has a knack for physical comedy. The scenes involving the ball dress, her over-the-top emulating of Scarlett in GWTW, and a well-timed swoon, are very, very funny.

All of the actors are fully invested in their characters and certainly familiar as types, particularly to a Southern audience. This is a Jewish family that seemingly has never heard any Hebrew or Yiddish, can’t pronounce Shabbat Shalom, and has only been to one Passover (reluctantly), and that was while visiting relatives. But there were nods of recognition throughout the audience for both Elliott’s and Rome’s Southern ladies. This is an experienced cast and they are uniformly adept at inhabiting their characters’ psyches.

Amber Paige McGinnis directed. Daniel Conway (scenic design) put together a set that was traditional, rich and familiar. The costumes designed by Kelsey Hunt captured the pre-WWII era beautifully; and yes, she outdid herself on Lala’s ball gown. One caveat was that the scene changes were a bit cumbersome; the stage never fully darkened, and sometimes characters just stood and waited while crew moved things around, while the audience watched.

Running Time: Approximately 2 hours and 15 minutes with one intermission.

Advisory: Adult themes and mentions of racial and ethnic prejudices using slang terms of the time.