Theatre Review: ‘Twas The Night Before Christmas’ at The Newtowne Players 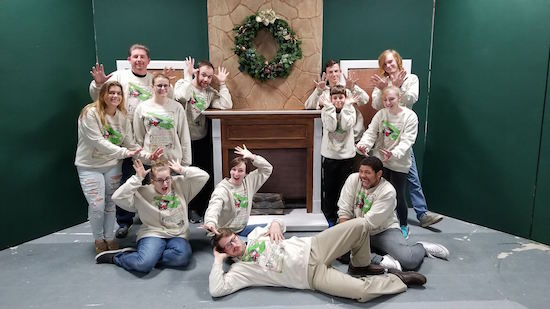 ‘Tis the Season! Cast. Photo provided by The Newtowne Players.

Twas the night before Christmas, and all through the house, not a theatre patron is silent, due to Amos the mouse. You see, he is stirring up cookies this year in hopes that Santa will soon be here. Instead, he finds himself, and his friend Emily, embarking on a dangerous, life-changing journey. He’d like to invite you along for the ride.

The Newtowne Players (NTP), located in Lexington Park, MD, is putting on “Twas The Night Before Christmas” by Ken Ludwig until December 10th. Performances are Friday-Sunday. This is another gem of a show at Three Notch Theatre, full of fun, adventure, and genuine Christmas cheer. From the moment you enter the house, the audience is greeted by foyer music played live by Steve Pugh, and the stage is set with a living room. Yes, as I took my seat, I began to feel as though I never left home. The ushers, box office, and even the other patrons were so kind and courteous that it even began to feel as though I was a part of the theatre family. This theatre definitely accomplished a family-friendly atmosphere before the show even started, and it only got better.

NTP’s “Twas The Night Before Christmas” is chock full of surprises and guest appearances, full of clever humor that will have your sides splitting, and will leave you smiling from the inside out at the end of the night. Regardless of whether you are 2 or 92, you will love this show!

As the show was about to begin, the director took to the stage and introduced himself, apologizing for the few minute late start. Just as he was finishing his statement, a very special guest arrived. I hope you all have been super nice this year, because Santa is here at NTP, and he might have a special surprise for you. He actually came out into the audience to meet one little girl who was afraid to come and see him and gave her a very special welcome. Just as quickly as he appeared, Santa was off, and suddenly the stage came to life. Uncle Brierly (played hilariously by Steve Pugh) began to read us that famous poem, “Twas The Night Before Christmas.” The only catch is that he was interrupted several times by a mouse (played delightfully by Andrew Roell), who is definitely stirring, and suddenly pigeons were dancing with sugar plums and Uncle Brierly was bombarded by the Sneeds. In comes Wendell (Kenneth Faison), Brittania (Meg Pugh), and Emily (Sophia Williams), and the family reunion is reminiscent of my family’s Christmas reunions.

The show very quickly moves forward, with the introduction of the mouse, whose name is Amos, and some fantastic rapping. Amos and Emily want Santa to visit their house this year, as he missed their house last year, so they hope to get his attention so he will visit. An elf named Calliope (played gracefully by Meg Pugh) joins the twosome, and together they journey to the North Pole to talk to Santa. Of course, as is the case with any good children’s play, the villains appear in all hilarity and evilness, with an equally far-fetched, money-making scheme. Sir Guy (played marvelously by Steve Pugh) and Mulch (played hilariously by Kenneth Faison) are trying to steal the naughty/nice list from Santa! After a few twists, turns, the appearance of Amos’ cousin from the country (portrayed fantastically by Andrew Roell’s doppelganger), a few superheroes, a trumpeter (perfectly portrayed by Sean McKean), Scooby Doo, the Wicked Witch of the West, and some more rapping, Santa finally clocks in and the rest is history. We all know how the poem ends, or do we?

The director, Timothy Joyce, and the assistant director, Aubrey Joyce, did not direct a theatrical play about Christmas. Instead, they created a Christmas experience for theatergoers to enjoy, and involved wonderful actors/actresses, ushers, and designers to help them achieve it! The set, designed by Chris Maulden, was incredible! Every time the stage crew rotated the stage, I gasped at the childlike simplicity of the set. Santa’s workshop was exactly as I imagined. Kudos to him for being able to capture such creativity and fun on his set! The costumes, designed by Marie Waltrip, were charming and perfect for each character. I especially liked how I could see a reflection of Uncle Brierly’s attire in Sir Guy’s attire, and how she used color to reflect the character’s feelings. The combat routines, created by Russell Therrien, and the properties, designed by Greg Rumpf, were perfect! The only critique of the theatre that I have would be that there were a few light changes that were noticeably early, but they were quickly resolved and did not take away from the show.

All in all, “Twas The Night Before Christmas” was a fun, family-friendly show that I would love to see again. If you are looking for a place to take the family for some bonding time, or maybe searching for a heartwarming Christmas story, this is the show you should come and see. NTP’s “Twas The Night Before Christmas” is chock full of surprises and guest appearances, full of clever humor that will have your sides splitting, and will leave you smiling from the inside out at the end of the night. Regardless of whether you are 2 or 92, you will love this show!

Advisory: There is a great deal of imagination, magic, and audience involvement in this show. Actors do move throughout the seating area at several points in the show. There is one moment of a stuffed animal being beheaded and put back together, several Peter Pan-like sword fights, and some slapstick humor that involves accidental tripping/hitting.

“Twas The Night Before Christmas” will be playing at Newtowne Players in Lexington Park, MD until December 10, 2017. For more information, or to purchase tickets, please see here.