1. It’s a Wonderful Life: A Live Radio Play at The Colonial Players of Annapolis.

“With a wildly versatile, ever-morphing ensemble of talented actors, a smorgasbord of precisely-timed, nostalgic sound and staging effects, and a comical treat of hilariously clever commercial jingles…, there is never a dull moment in this theatrical masterpiece!” – Genean Hines Grobe.

Synopsis: This beloved American holiday classic comes to captivating life as a live 1940s radio broadcast. With the help of an ensemble that brings a few dozen characters to the stage, the story of idealistic George Bailey unfolds as he considers ending his life one fateful Christmas Eve. 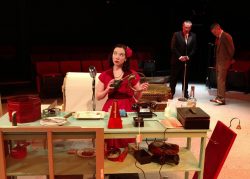 2. Private Confessions at The Kennedy Center. 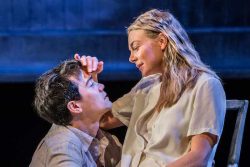 The cast of ‘Private Confessions.’ Photo provided by The Kennedy Center.

3. The Goodies: A New Devised Piece at Iron Crow Theatre.

“Performed by a powerful ensemble, Iron Crow’s “The Goodies” is cutting-edge and provocative storytelling at its best.” – Barry Kramer.

Synopsis: This season Iron Crow Theatre debuts it’s second original, devised work! The Goodies, featuring an all female cast of color, re-tells the story of the Salem Witch Trials, through the lens of modern day America. If, as the old adage states, history were to repeat itself,  how would this mark in American history unfold again within the brave new world of the digital age? With fake news, nasty women, and the demonization of all “others”, this horror story of our own history may not be as impossible as we think. 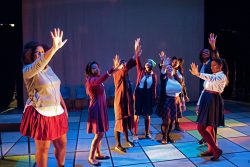 The cast of ‘The Goodies’ at Iron Crow Theatre. Photo by Rob Clatterbuck.

4. A Christmas Carol at Memorial Players.

“A Memorial Players production is a guarantee fantastic show because all the players put their hearts, love and faith into each and every production.” – April Forrer.

Synopsis: Experience the childlike wonder of this heartwarming story that follows the Ghosts of Christmas Past, Present, and Future as they take Ebenezer Scrooge on a journey of redemption where he learns the power of kindness and compassion. 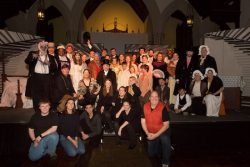 The cast and crew of “A Christmas Carol.” Photo provided by Memorial Players.

5. Miracle on 34th Street: The Musical at Toby’s Dinner Theatre.

“…Toby’s “Miracle on 34th Street: The Musical” is a Christmas classic…It’s immersive theatre at its best.” – Kaley Beins.

Synopsis: “It’s beginning to look a lot like Christmas” at Toby’s.  This musical adaptation of the classic film is the holiday tale of a young girl who doubts the existence of Santa Claus until a very special, white-bearded old man changes her mind. Recreating the magic of the classic story, Miracle on 34 th Street is a joyous, heartwarming musical, the perfect holiday treat for the entire family.  Dreams do come true, if you believe! 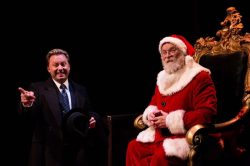