“‘First Date’ at Spotlighters Theatre is a holiday treat and an adorable piece of theatre…” – Timoth David Copney.

Synopsis: When blind date newbie Aaron is set up with serial-dater Casey, a casual drink at a busy New York restaurant turns into a hilarious high-stakes dinner. As the date unfolds in real time, the couple quickly finds that they are not alone on this unpredictable evening. In a delightful and unexpected twist, Casey and Aaron’s inner critics take on a life of their own when other restaurant patrons transform into supportive best friends, manipulative exes and protective parents, who sing and dance them through ice-breakers, appetizers and potential conversational land mines. Can this couple turn what could be a dating disaster into something special before the check arrives? 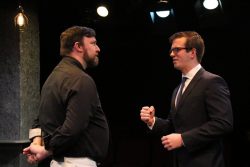 2. Curve of Departure at Studio Theatre.

“‘Curve of Departure’ is about family and what we do for the ones we love.” – Elle Marie Sullivan.

Synopsis: The night before a funeral, family members gather in a single hotel room in New Mexico, shuffling sleeping arrangements, dealing with absent family members, and preparing for their uncertain futures. A play about the moments you decide how much you will give to someone you owe nothing to. Straight from its world premiere production at South Coast Rep, Curve of Departure returns the playwright and director of The Wolfe Twins to Studio. 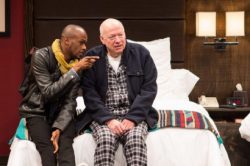 3. The Revolutionist at Everyman Theatre.

“Everyman Theatre should be commended for honoring women in this extraordinary evening of theatre.” – April Forrer.

Synopsis: Greetings from the French Revolution—where heads will roll. When you put former queen Marie Antoinette, assassin Charlotte Corday, playwright Olympe de Gouges, and Caribbean spy Marianne Angelle in a room together, literally ANYTHING can happen—especially big laughs! France’s fight for equality and freedom propels itself to modern times with this bold, brave and blisteringly funny new work about feminism, legacy and standing up for one’s beliefs. Who runs the world? The jury’s still out, but these girls sure as hell changed it.

4. An Irish Carol at the Keegan Theatre.

“…this play comes but once a year, and when it comes, it certainly brings great cheer.” – Norah Dick.

Synopsis: Set in a modern Dublin pub, AN IRISH CAROL is an homage to Dickens’ classic – told as only the Irish can. The play, both comic and touching, follows one evening in the life of David, a wealthy pub owner who has lost touch with his own humanity in the interest of self-protection and material success. But on this Christmas Eve – challenged by a voice from the past, provoked by those in this present, and faced with the reality of lonely future – David’s life may change forever.

The cast of ‘An Irish Carol.’ Photo by Mike Kozemchak.

“…a riveting performance in which words would be superfluous.” – Mary Ann Johnson.

Synopsis: During the bustle of holiday crowds, Gretel tries to keep her brother, Hansel, out of trouble while their unengaged babysitter leaves Gretel to fend for them both. As Hansel embarks on his own wonder-filled exploration of his everyday surroundings, he and his sister fall into a magical realm that takes them far away from home. In this wordless production, the well-beloved Grimm fairy tale embraces the fantastical through the eyes of those who see the world through a different lens.

From front to back, Raven Wilkes, Sharisse Taylor, and Justin J. Bell in ‘Hansel & Gretel.”