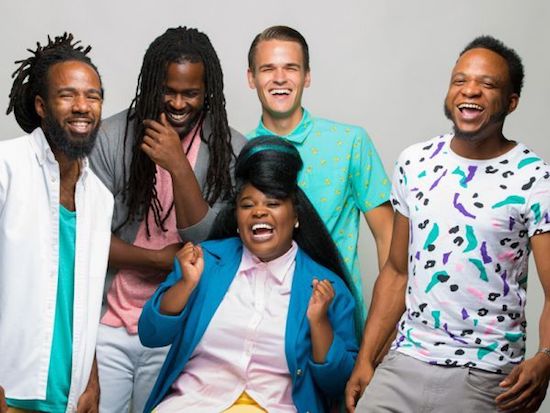 PULSE featuring Tank and the Bangas’ with members of Baltimore Symphony Orchestra (BSO).

The Think Tank was live and in effect in the Joseph Meyerhoff Symphony Hall for the Pulse concert series last night, and they gave us a night to remember. The Pulse concert series is a series of concerts where the BSO (Baltimore Symphony Orchestra) invites raw, effortless, and non-traditional brilliance to the stage for a day, to blow our minds in their own performances and in a collaborative performance with the BSO (Baltimore Symphony Orchestra).  I could hardly wait for Tank and the Bangas to hit the stage, but there was tons of awesome entertainment that got us warmed up and ready for a show we’ll never forget.

The night started early with, J Pope and the HearNow’s pre-show lobby performance and a bit of mingling with like minds and familiar faces. It was by far the ultimate appetizer and the perfect beginning to an evening filled with sounds that would tug at our hearts and move our bodies.

Once we made our way into the symphony hall, we set and enjoyed the opening act which consisted of the BSO’s (Baltimore Symphony Orchestra) cello section. The sound of the cellos put us in a folk-like mood. The sounds had a swamp like thickness, a sultriness that was beyond divine, and a pace that kept us engaged. We set back in our sturdy wooden chairs enjoying the sounds that forced us to silence and observation. After the metal-influenced selection arranged by conductor Nicholas Hersh, the stage was set and prepared for Tank and the Bangas. The audience’s attention shifted from silent observation to rowdy encouragement filled shouts of love, respect and admiration for an artistry that is incomparable. One of the most enjoyable happenings of the Pulse concert series is the jump in genres. No matter how different they may seem,  the sounds gradually merge together and find common ground within our favorite noise we call music.

Tarriona “Tank” Ball and the Bangas set the stage on fire as soon as they arrived. After shouting out their Baltimore native bass player and band member Norman Spence,  the band found their places and Tarriona “Tank” Ball made her way center stage. She gave us LIFE with her black and white striped cape, and we roared even louder as she turned around and showed off the flawless embroidery that graced its long bottom.

Now, I am no Tank and the Bangas amateur. Being from New Orleans, I’ve followed The “Think Tank” since the beginning, and I’ve seen them perform on stages near Frenchman Street in the French Quarters a time or two. But, to hear them in this space, on that stage, in this way, almost brought me to tears. Watching Tank and the Bangas is like watching a grown and groovy musical with sneak peaks of whimsical sounds we encountered in our childhood. It’s like Rock and Jazz had a baby.  It’s like hip-hop time traveled forward and backwards and this is what it became. It’s like bebop and blues. Intoxicated poetry. It’s an explosion of genres. Chaotic Beauty. Consistent change. Logical contradiction. It’s life.

Tarriona’s voice is by far one of the greatest voices of our time. With an endless amount of characterization, she often sounds like several different people sharing verses in perfect timing, while background vocalist Anjelika “Jelly” Joseph adds an incredibly organic sound of call and response that made me do backflips in my chair. Their voices and instruments united as one sound. Never have I experienced a band so in tune with each other. There was an understanding amongst them that made us understand.

As the BSO (Baltimore Symphony Orchestra) members made their way to the stage once again, it was incomprehensibly beautiful to watch them all on stage together. As they began, her voice rippled throughout the auditorium and the sounds sent us to another dimension. Somewhere enchanted but real. Somewhere we didn’t have to put our feet down or feel our own weight. Somewhere we could float. What an experience. Baltimore love’s you Tank and the Bangas. Until we meet again.