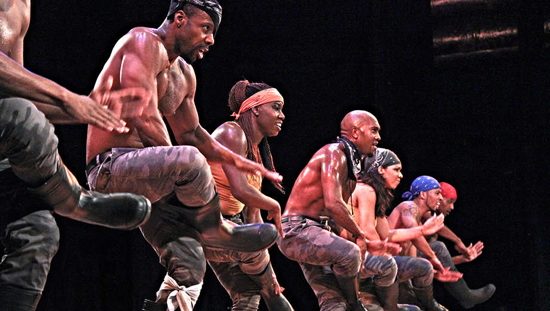 Synchronicity is the glue in the art of stepping. Without it, rhythms become incomprehensible and movement seems chaotic. With it, steppers can create one solid, yet fluid line while simultaneously making body percussion look so effortless. But above all, what ultimately sets a step team apart is their confidence in the energy they stomp out and clap away.

There was no denying the incredible talent that joined “Step Afrika!” on stage Sunday night at the Music Center at Strathmore. Stepping is not only a mesmerizing art form, it stirs something deep within the soul which begs to be heard. Unlike other dance performances, audience participation is encouraged. The louder the vocal support, the more the energy vibrates from the steppers’ heels, to the floor, and back out to the audience. Attendees made their voices of support loud and clear throughout the night, and rightly so.

There was no denying the incredible talent that joined “Step Afrika!”

First to the stage was Step Afrika!, the first professional stepping dance company in the world. Although based out of Washington, DC, Step Afrika! made a nod to traditional South African dance and costumes and breakdancing with mini-battles in their opening performance.

After Step Afrika’s fast-paced performance, the men of Alpha Phi Alpha Fraternity, Inc. – Beta Chapter at Howard University took the stage all dressed as Hercules. Their performance showcased their work ethic and sense of humor, with solid movement, intense facial expressions and story narration by the Golden Fleece. From Suffolk, Va, EKLIPSE, a high school, co-ed division of Kids Always on the Same Step, incorporated swing dance and glow-in-the-dark shoes and bracelets into their upbeat performance.

Meanwhile, the Lady Raiders and the Paint Branch Eclectic Steppers, both from Maryland, brought strength and sass with their all-female performances. Dressed in green aprons, the Lady Raiders guided the audience through “Whole Steps” training, bouncing from serious step explanations to smiley, doll-like narration. Featured in the 2017 documentary “Step,” the Paint Branch Eclectic Steppers walked on stage with headbands and arms flexed like Rosie the Riveter. Their passionate moves were amplified further by audio snippets of Oprah Winfrey’s recent Golden Globes speech.

Dem Raider Boyz Step Squad rounded out the night with their step version of King Arthur. Each time the group failed to pull the sword from the stone, they went back to center stage to step it out, convinced their moves would help. Only when they brought their magic steps, did the sword come loose. Their theatrics were just as entertaining as their polyrhythmic, round combinations.

All of the youth teams joined Step Afrika! for their final performance, during which Rowan Corbett blew the audience away with his bones solo. The energy continued to be felt hours later in my heart, which seemed to be beating louder, and my brain, which continued to dissect the layers of creativity, passion and dedication each group put into their performance.

While applause is the most common way to give thanks for those sharing their art, it didn’t seem to accurately portray my appreciation for the stepping community, especially after a night of professional, perfectly synchronized clapping.

Running Time: 105 minutes with no intermission.

Tickets and performance schedules for The Music Center at Strathmore can be found at www.strathmore.org. To see where Step Afrika! is headed next, click here. Stay tuned for local performances this summer of “The Migration: Reflections on Jacob Lawrence,” which was recently on Broadway in New York, NY.