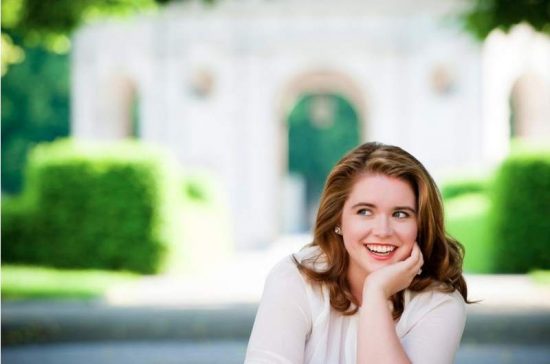 If you had gone into Irish mezzo-soprano Tara Erraught’s recital at the Kennedy Center on Jan. 9 expecting a series of music from her homeland, you would have been sorely mistaken — Erraught, despite her own admission that she considers herself something of a cultural ambassador for Ireland, has a repertoire that includes Hungarian composer Franz Liszt, English figure Roger Quilter, and romantic favorite Richard Strauss. And it was clear, throughout her performance, that she loved them all–and enjoyed singing them even more.

…Erraught sings every note with her whole being as if her body were a vessel for the music and stories flowing through it.

Erraught has an undoubtedly powerful voice, but what was striking about her performance was the versatility with which she used it–in “Oh! Quand je dors,” her vocals were carefully measured, sensing when it was time to soar and when it was time to temper the vibrato. In “Now sleeps the crimson petal,” she seemed to be caressing the high notes with her voice, with a sweetness and a gentleness that made the whole performance just beautiful. Perhaps lending to this versatility is the fact that Erraught sings every note with her whole being as if her body were a vessel for the music and stories flowing through it.

This was most clear with songs such as “Comment, disaient-ils,” based on a poem by Victor Hugo, in which she voiced men and women in a conversation with each other–or, more accurately, at each other. She shifted between characters, playing both the foolish men and the wise women who answer them, flashing a conspiratorial smile at the audience during the women’s response. Her excellent comedic timing and total understanding of her music continued with “Encounter,” a song by Hugo Wolf. The song, the second-hand story of an encounter between a man and a young woman, turned in Erraught’s performance into a gossipy, humorous recount, earning a laugh from the audience.

This was the first performance of Vocal Arts DC that included traditional opera titles, suspended on a screen above the stage, in addition to the usual translations including in the program. It is unclear if the experiment will be repeated, but it was incredibly useful, ensuring that one did not have to look away from the stage to understand the content of the songs. This was especially important for Erraught’s performance–while in many concerts, listening to the vocals would be sufficient, it was important to catch what the singer was doing with her face, her hands, her arms. In this case, the titles helped get across the whole of what Erraught can do, beyond her ability to hit high notes and sustain vibrato.

Erraught and her accompaniment, Irish pianist John O’Conor, were called back for two encores, culminating in a sweet and startlingly powerful rendition of Irish classic “Danny Boy.” Each time, both performers seemed both amused and astonished at the rousing and continued applause.