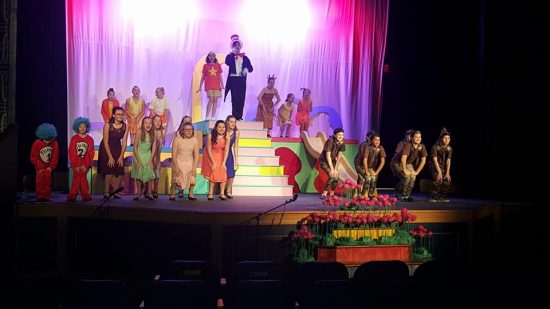 The cast of “Seussical Jr.” at Spotlight Musical Theatre. Photo by Karen Hilderbrand.

Watching “Seussical Jr.” at Spotlight Musical Theatre sent me into the not-too-distant past to my own days of educational theatre programs. As a child, there’s nothing more enriching and exhilarating than being able to perform in a big, professional theatre, on a beautiful set, alongside a cast and crew that cares as much about the production as you do. And Spotlight Musical Theatre certainly seemed to provide such an experience. The show was performed in the gorgeous 270-seat theatre at The Carroll Arts Center in Westminster; the set, constructed by John Hilderbrand, Bill Ripple, and Mike O’Grady, was colorful, playful, and looked like it had come straight out of one of Dr. Seuss’s books. There was even a slide attached to one of the platforms, and my inner child rejoiced when I noticed it!

…“Seussical Jr.” was a wonderful show full of extremely talented and hardworking kids and teenagers.

The cast was similarly delightful. Made up of about forty students, ages eight and up, each kid seemed to be having the time of their life singing and dancing to the show’s catchy tunes. Many parts were double cast, giving more children opportunities to show off their skills; I saw the Saturday cast, which was full of amazing talent and spectacular performances! Sophie Snider gave a particularly wonderful performance as Gertrude; her sweet voice and mannerisms shined in songs like “The One-Feathered Tail of Ms. Gertrude McFuzz,” and later, she showed off her impressive belt with Gertrude’s rock ballad “All For You.” Camden Roach perfectly captured Horton’s kindhearted nature, and his beautiful voice was perfect for such songs as “Alone in the Universe” and “Solla Sollew”—both of which seemed to infect the audience with a bad case of the sniffles. Other notable performances came from Peyton Kern as the snarky but sweet-voiced Sour Kangaroo, Ayden Behn as the hilarious Cat in the Hat, and Gracie Ray as JoJo, a young Who who makes friends with Horton.

Overall, “Seussical Jr.” was a wonderful show full of extremely talented and hardworking kids and teenagers. It looked just like the kind of show I would have loved to be in when I was younger, and it was evident that the students had really worked hard to get their production looking and sounding as polished as it was. Congratulations to the entire cast and crew of “Seussical Jr.” for putting on a wonderful production!

Though the show’s limited run is now over, there are plenty more opportunities to be a part of Spotlight Musical Theatre! Their next show will be “Mary Poppins Jr.”—to register your child, click here—and information about their summer programs can be found here.