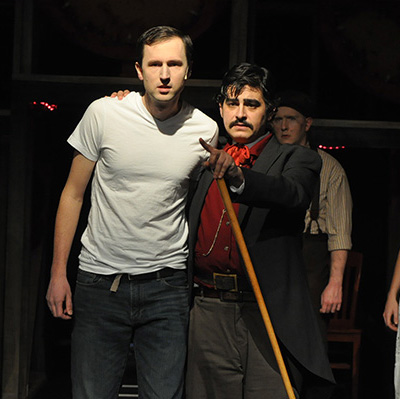 “Everybody’s got the right to be happy.” But do they? At what cost? This line helps to open the polarizing musical “Assassins” by Steven Sondheim and John Weidman, now playing at Gunston Theatre Two.

For those unfamiliar with the story, “Assassins” is a unique theatre experience; 9 seemingly unrelated people are gathered at a sort of carnival, hosted by the Proprietor (James Maxted.) Their connection soon becomes clear – they have all (either successfully or unsuccessfully) attempted to kill a president of the United States. Some you might recognize: John Wilkes Booth (Jonathan Cagle-Mulberg), who killed Abraham Lincoln, John Hinckley, Jr. (Mike Rudden), who tried to kill Ronald Reagan to impress film star Jodie Foster, Lynette “Squeaky” Fromme (Sarah Elizabeth Edwards), who attempted to kill Gerald Ford for her paramour Charles Manson, and perhaps the most well-known assassin of all time, Lee Harvey Oswald (Michael Gale), who of course murdered John F. Kennedy.

Director Melissa Jo York-Tilley should take a great deal of pride in the absorbing and provocative production that she and this cast and crew have produced.

However, there are some lesser known assassins in the mix as well. Giuseppe Zangara (Eric Verchot) made an attempt on Franklin Delano Roosevelt, Leon Czolgosz (Peter Curtin) successfully assassinated president William McKinley, Charles J. Guiteau (Aaron Ware) shot president James Garfield, who died of a related infection two months later, Sarah Jane Moore (Colleen Robinson) who also made an unsuccessful attempt on the life of Gerald Ford, and Samuel Byck (Jay Tilley), who wanted to crash a plane into the White House to kill Richard Nixon. The show is unique in that instead of a linear storyline, it presents short vignettes that provide more insight into the lives, minds, and ultimately motives of these everyday people turned murderous. Herein lies the controversy; does providing a more humanizing look at people who committed heinous crimes lessen the gravity of what they have done? Or does understanding the flaws and misguided motivations of these people make all of us look deeper at the antecedents of violence in our culture? The show offers no easy answers, only food for thought.

Dominion Stage delivers an excellent and well-crafted production of this complicated musical; both thought-provoking and enjoyable. The cast is incredibly talented and able to switch between the serious tones and black comedy effortlessly. Every single member of the cast is perfectly suited to their character and provides both impressive individual performances and impeccable ensemble work.

While everyone did an incredible job, this reviewer particularly enjoyed Tilley and Ware’s work. Tilley did a fantastic job portraying a man with serious mental illness with pathos, but also showing the pathway he followed to violence with honesty. His monologues were funny, poignant, and frightening all at once. Ware’s manic portrayal of the aspiring ambassador to France, Guiteau, also blended the lines of comedy and tragedy. His beautiful, soaring tenor helped to make “The Ballad of Guiteau” a highlight of the show for me. I also throughly enjoyed “Unworthy of Your Love,” perhaps one of the most unconventional love songs ever written. It was mellifluously (and a bit creepily when you really think about it) performed by Edwards and Rudden. The ensemble was also captivating, as they provided well-needed context and depth to the stories of these flawed individuals.

The production was also helped by a strong technical and artistic team. The set was both beautiful and functional, full of color and whimsy. It was built on two levels and provided both performance and rest space for the main cast, as they were on stage for the entire duration of the performance (Set Design by James Maxted.) The costumes were gorgeous and very historically accurate, which is especially impressive considering the wide span of time periods represented within the show (Costume Design by Kathy Dunlap.) The music was also amazingly rich and brought to life by a full orchestra, which seemed like magic because they were all hidden behind the stage (Matthew Scarborough, Music Director and Orchestra Conductor.) Director Melissa Jo York-Tilley should take a great deal of pride in the absorbing and provocative production that she and this cast and crew have produced. This reviewer highly recommends checking it out while you have the chance; it is highly enjoyable and you might just learn something, as I did.

Running Time: Approximately 1 hour and 50 minutes with no intermission.

Advisory: This show contains gunshot sound elements, adult language/mature situations, the use of fog, special lighting, and strobe effects. Due to the mature content, this show is recommended for audiences 16 and older.

“Assassins” is presented by Dominion Stage and is now playing at Gunston Theatre Two through February 10th, 2018. You can find more information on tickets here.