Theatre Review: ‘The Humans’ at the Kennedy Center 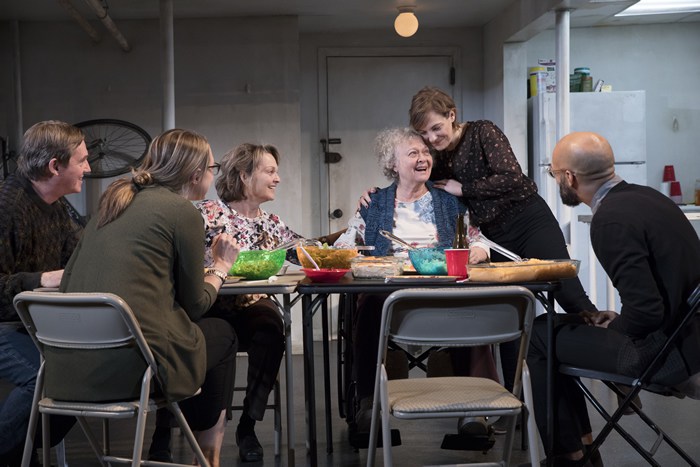 Thursday night at the Kennedy Center, theater-goers arrived, abuzz with anticipation to see Stephen Karam’s award-winning play, “The Humans.” A fairly new addition to the theater catalogue, “The Humans” premiered on Broadway in 2016 and won 4 Tony awards that same year, including Best Play. The plot is a familiar one, set over Thanksgiving dinner with a stereotypical, modern American family, the Blakes.  And as is typical of holidays spent with family, the Blakes’ time together is punctuated with moments of hilarity, tension, and compassion that brings out the good, the bad, and the ugly in each of them. This Tony award-winning masterpiece holds a mirror up to the beautiful, yet broken reality of family relationships, and in the process, exposes the complex humanity in us all.

From beginning to end, this uplifting masterpiece entertains through its simple portrayal of human complexity.

This year the Blakes break their normal holiday tradition and travel from rural Pennsylvania to spend Thanksgiving at their daughter’s dreary new apartment in NYC. However, formalities quickly dissolve into familiar arguments. Deirdre worries about her daughter Brigid’s choice to move in with her boyfriend and takes every opportunity to remark upon the importance of marriage and commitment. Exhausted by playing hostess to her highly critical family, Birgid craves respect for her decisions as an adult but resorts to returning their criticism with judgmental retorts. Eric struggles to relate to the boyfriend, Rich, despite Rich’s best attempts to bond over their shared experience of disturbing dreams. Older sister and lawyer Aimee finds herself back in the role as family peacemaker which she eagerly embraces as long as no one discusses her health issues, job insecurity and recent break-up with her girlfriend. Despite all the various tensions, the Blakes’ underlining sense of love and strength as a family unit triumph through any difficulty life throws their way. In her Thanksgiving toast, Aimee reflects on how no matter how messy a family can be, the most important thing is to be grateful for always having a loving home to come back to.

This Tony award-winning cast, under the direction of Joe Mantello, gifts their characters with a seemingly effortless believability. Pamela Reed both warms your heart and induces eye rolling with her interpretation of the passive-aggressively judgmental and overly caring mother, Dierdre Blake. Her husband, Erik Blake, played by Richard Thomas, although struggling with both past and present demons, is particularly endearing in his evident love for his daughters and his desperate need for their forgiveness. Daisy Eagan encapsulates today’s millennial woman in her portrayal of Birgid, moving away from the traditional conventions of her Baby Boomer blue-collar parents to pursue her dreams, and yet still maintaining some semblance of her mother in her own role as an over-anxious hostess. Rich, played by Luis Vega, provides the perfect partner to Brigid with his hipster attire, debt-ridden grad student status, and need to please personality. In a moment of perfect generational juxtaposition, Rich offers Erik rainbow chard and incites a comical argument between Erik and Brigid over the ridiculous habits of millennials including Brigid’s recent juice cleanse. Therese Plaehn displays impressive prowess in her ability to navigate Aimee’s heart-wrenching moments of despair and then defect them with an innate sense of comedic timing that keeps the audience wiping away tears of both sympathy and laughter. Though often forgotten on stage, Lauren Klein gave a striking performance as Momo, Erik’s mother with late stage dementia. Her oscillations between peaceful sleep, incoherent mutterings and a screaming fit of rage invoke pity for the slow deterioration of the mind and the difficulty of caring for aging parents.

Brigid’s dingy two-story apartment is masterfully brought to life by David Zinn. Although bare bones, the set is full of fascinating piles of boxes stuffed into corners, half-open paint cans, and the card table and folding chairs emblematic of a half moved into an apartment. Costuming by Sarah Laux takes an understated approach as well, curating the reality of the Blakes as the neighbors next door. The lighting design by Justin Townsend also compliments this minimal aesthetic. The bare bulbs dotting the ceiling only serve to further illuminate the dreariness of the empty apartment and seem suggestive of the bitter snowstorm just outside. As the bulbs go out one by one, the quirky pre-war duplex transforms into a spooky haunt.

“The Humans” rings especially poignant this time of year as most of us have just returned from holidays spent with family. The struggles and successes of the Blakes, as portrayed by this stupendous cast, are both easily relatable and painfully realistic. From beginning to end, this uplifting masterpiece entertains through its simple portrayal of human complexity.

Parental Advisory: The Humans contains mature content, recommended for ages 15 and up.

“The Humans” is playing at Eisenhower Theater at the Kennedy Center in Washington, D.C. through Sunday, January 28th, 2018. For tickets or more information, click here.