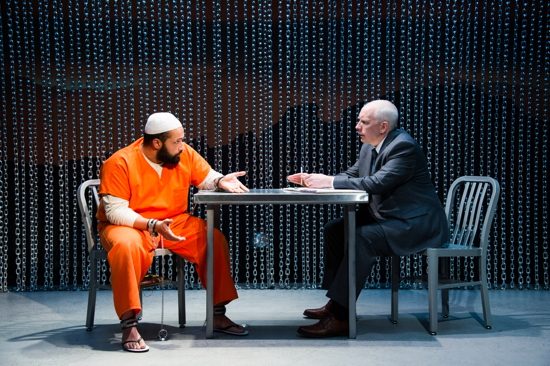 How would you survive 4,380 nights in prison, on an island halfway around the world from your home, without charges, but suspected of being a terrorist? That is the question that playwright Annalisa Dias poses in the world premiere of her new play at Arlington’s Signature Theatre.

This is the story of one man held at Guantanamo in Cuba on suspicion of being a terrorist for 12 years. He is subject to continuous interrogation and torture, often of a sexual nature. His very humanity is denied. Eventually, he meets an idealistic American lawyer who tries to work within the law, and there are different laws at work here (both military and Constitutional), which are often at odds with each other. The lawyer ends up spending 10 years working on this case, but he gets to go home after each trip to see his client, while his client gets another round of interrogation.

Adding to the complexity of the play is the history of the suspect. An ancestor had worked with the French in Algiers to suppress an uprising among the native population, which resulted in 1,200 men, women and children being killed in a mountain hideaway by smoke and fire. Because of his actions in working with the French, and the man who became known as the Butcher of Algiers, he is forced to relocate to Lyons in France, where his descendants live. Another complication is the fact that the suspect had traveled to Algiers and also to other Middle Eastern countries, all of which counted against him in the eyes of the military and intelligence services after 9/11.

There is one woman in the cast, known only as The Woman. She seems to play a Scheherazade-type of role as she tells stories to a character known as The Man, Colonel Aimable Pellissier, and directly addresses the audience with images of the bloody history of Algiers in its fight for self-determination.

Structurally, this is a difficult play. The Woman’s part is not well-defined in the context of the story. She tells parts of stories, but except for the few minutes at the beginning and end that she addresses the audience, she spends much of the time at the sides of the set curled up on pillows. She does waft across the back of the stage at certain intervals, mainly to place on Kamal’s head a turban when he is in character as the ancestor.

As The Man, Casey dons a lounging robe and demands that The Woman tell him the story of the Man with the Plastic Face, but it doesn’t seem connected to the main story. We’re never sure why The Woman is with him or why he is possibly in Algiers.

Daugherty exemplifies all the cruelty and condescension of colonial rule as the Colonel, and also as Harrison, the soldier who interrogates Malik Essaid. His moments of sexual abuse of the suspect are wrenching to watch.

Casey does incisive work as the lawyer completely out of his depth doing pro bono work for Malik. He tries so hard to understand the complicated history of his client, while still trying to believe in American justice and rule of law, that at times it is painful to watch the loss of his innocence. As The Man, he embodies arrogance and fear, but the part never fully jells in the context of the story.

Ahmad Kamal gives bravura performances both as the suspect, Malik, and as his ancestor, El Hadj El Kaim. As Malik you feel his anguish, anger and bewilderment at having been caught up in the madness following 9/11. As El Kaim, he strikes all the right notes as the leader of Algerian soldiers trying to work with the French in putting down an insurrection, even as he tries, unsuccessfully, to educate the Colonel on the complicated history of his land.

But in the end, the play tries to do too much and covers too much territory, thereby sacrificing much of the outrage the playwright seems to be aiming for. The roles of The Man and The Woman appear extraneous and didn’t really add anything to the audience’s perception of the moral injustices perpetuated by the American military at Guantanamo.

“4,380 Nights” runs from January 16 through February 18, 2018, at Signature Theatre, Arlington, VA, in the ARK, the smaller of the two theatres. It is Signature’s submission to the 2018 Women’s Voices Theater Festival. For more information, click here.