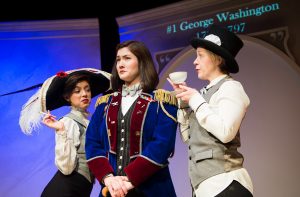 “45 Plays for 45 Presidents” is a rough, vital, essential work of theatre, currently being expertly performed by a perfectly selected cast at NextStop Theatre Company.

The show — actually a collection, as the title indicates, of 45 short plays, one about each U.S. chief executive (yes, Grover Cleveland gets two non-consecutive plays) — was conceived and first produced in Chicago during the reign of Bush the Younger and updated with each new POTUS. At NextStop, all 45 are portrayed by female actors, a sharp contrast with the exactly zero presidents portrayed who were not men.

“45 Plays” will make you laugh and ponder, and make you furious and despondent, but will ultimately leave you with a glimmer of that thing called hope.

Director Megan Behm selected her five stars well in order to create a vivid emotional spectrum. Carolyn Kashner is poised, Brittany Martz bubbly, Chloe Mikala passionate, Mary Myers incendiary, and Sarah Anne Sillers regal — and each is also a talented physical comedian. With so much to cover so fast, this last part is important, since some of the show’s funnier scenes are broad slapstick. (One of the best, recounting the brief presidency of Zachary Taylor, contains no words at all.)

Like the 45 presidencies portrayed, the show is a mixed bag — a consideration of the dull Fillmore Administration drags on a bit — but unlike the presidencies, there are far more successes than failures here. And for every hilarious bit — like the Teddy Roosevelt play, in which four of the women play the frenetic TR at once in Marx Brothers style, or Martz’s surfer dude-inspired Warren Harding — there is a poignant one, such as the tragic story of drunken Franklin Pierce and his depressed wife Jane.

Myers is terrifying as a snarling Andrew Jackson, riling up a giddy, resentful proletarian washboard band in a play mirrored in the final of the 45 plays. But she is equally effective as Franklin Roosevelt, a scene in which she does not speak. Myers’s FDR simply sits and stares ahead as the other actors run through the highs and lows of his tenure, her face reflecting determination, exhaustion, and an occasional flash of guilt.

All five actors are skilled in such physical acting, leaping from broad song-and-dance scenes to quiet moments where a downcast eye or a slow gesture adds breadth to the story. With such a rush of plays, all five are always busy — be sure to look off into the sidelines often; there’s usually something going on.

In a town of history buffs and political types, some will be maddened by the portrayal of this or that president. I found myself occasionally wanting to shout “but what about…” at some omission or slight. (The show is also kinder than one might anticipate. George H.W. Bush’s fight between his sense of honor and his drive for office is explored, as are the better aspects of the Nixon years.)

But while “45 Plays” is ostensibly about our commanders-in-chief, it is more importantly about America’s political culture, and the many divisions we have withstood throughout the parade of presidents. “45 Plays” will make you laugh and ponder, and make you furious and despondent, but will ultimately leave you with a glimmer of that thing called hope.

Advisory: “45 Plays” contains recorded gunshot sounds, mature themes, and adult language which may not be appropriate for all audiences.