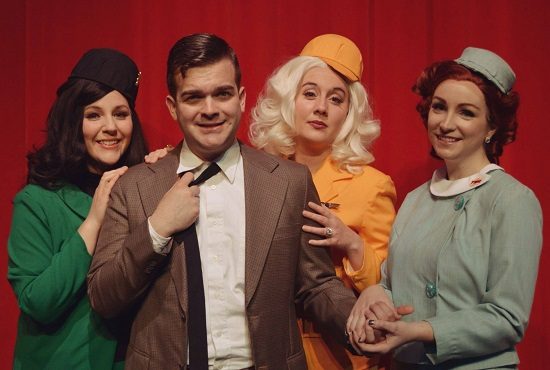 Rollicking. That word aptly describes the current production of the Port Tobacco Players (PTP), beginning with the welcome to the theatre and turn off your electronics speech pre-show. The stage is set, so to speak, when the announcer, in keeping with the airline-theme of the show, notes that in the case of emergency, here are the exits and oxygen masks will fall from the ceiling. The delivery is so smooth, the entire audience looks up, just as the announcer says, “You looked, didn’t you?”

“Boeing, Boeing” is a two-act farce about a young American man living in Paris, who has three fiancees—Gloria the American air hostess; (Gayle Morris Donahue); Gabriella the Italian air hostess (Liz Mildenstein); and Gretchen the German air hostess (Brenna Prestidge). Bernard (Justin Stirewalt) is an architect (surprisingly wealthy for an architect) who has crafted for himself a well-ordered life with his trio of beauties, each of whom he sees for two days a week; presumably, he rests on the seventh. He is attended to by the housekeeper, Berthe (Tessa N. Silvestro), who “came with the flat.”

…at one truly sublime moment, it was like watching an old Carol Burnett sketch with Tim Conway and Harvey Korman.

But such well-laid plans aren’t allowed to last. First, an old school friend, an upright and rather shy Wisconsin man named Robert (Benjamin Simpson), comes by unexpectedly for a visit. Then, for various reasons, including new technology (a faster jet) and bad weather, his fiancées start turning up. Insanity ensues with mixed-up bags, switching bedrooms, trips to the country for fresh air, trips to hotels, dinner plans, and it all hinges on Robert and Berthe. Berthe is a constant–when all starts falling apart, you can count on Berthe to continue complaining. Chaos ensues. By the time it is all sorted out, quite happily actually, one finds oneself in perfect sympathy with Berthe’s refusal to stay without that 40 percent raise.

The roles are delightfully played by all the actors. The air hostesses are glamorous, Bernard is urbane (at least until he panics, and that is truly funny), Robert is earnest and out of his depth (until he isn’t), and Berthe is a stalwart. In particular, there is a real chemistry between Simpson and Silvestro as Robert and Berthe. Their comic timing is sharp, both individually and when they interact, and at one truly sublime moment, it was like watching an old Carol Burnett sketch with Tim Conway and Harvey Korman.

The theater is a jewel-box of a renovated/repurposed old movie theater on the main street of La Plata. It is glamorously done up inside and it feels special sitting in the velvet seats waiting for the grand red curtain to go up. The Port Tobacco Players have been producing plays since 1947, and the building, which they own, is a lovely testament to the place of arts in the community.

In keeping with the structure, the set is stunning. The apartment that all the action takes place in is light and airy and has a sort of old-world feel in the woodwork and layout, even as some of the furniture is mid-century modern, befitting the time period of the play (1960s). The team of Chris Magee (set design and master carpenter), Kim Bessler (properties and set decoration), and Selena Zuhoski (assistant properties/set decoration) have created a posh set that grounds the action. The only off-note was a beanbag chair that seemed an afterthought. Quentin Nash Sagers is responsible for the costumes, which are true to the era and very flattering in cut and material to each actor. Christopher R. Smith, hair design, and Kaitelyn Bauer Dieguez, make-up design, evoke the era perfectly with their carefully coiffed and made-up air hostesses.

Kyle Rappe directed with a light touch and an understanding of the pacing needed for a farce that at times involves actors lunging and throwing themselves across the stage. The play was produced by Mike Gahan, who has been involved in the PTP since 1996 in a variety of roles, including producer.

“Boeing, Boeing” was written by Marc Camoletti and translated by Beverly Cross and Francis Evans.

Running Time: 2 hours and 30 minutes plus a 15-minute intermission.