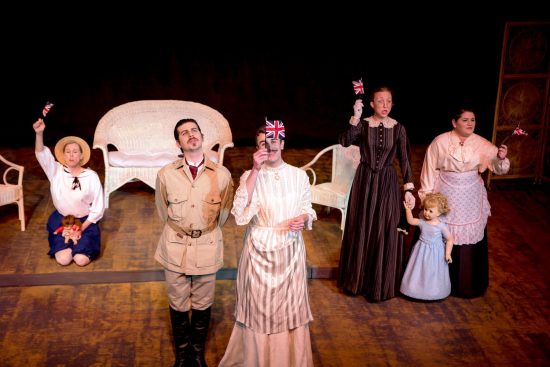 When Iron Crow Theatre’s Artistic Director and CEO Sean Elias chose to dub the 17-18 Season as the “Season of Identity,” he must have had Caryl Churchill’s “Cloud 9” in mind first and foremost. This thought-provoking, satirical and unorthodox play, written in 1979, explores the fluidity of sexual identity and gender identity, as well as racial identity and national identity with many of the familiar stereotypes entwined.  It is interesting that these themes emerged as far back as 1979 at a time when many people viewed gender as binary and not as fluid as we note today.

The play fits in very much with Iron Crow’s brand as being Baltimore’s queer theatre company. Under the methodical direction of Dr. Natka Bianchini, Iron Crow’s seven-person, talented ensemble cast does a marvelous job of conveying these identities with passion and skill.

The first act takes place in an unspecified country in Africa under British colonial rule in the Victorian era.  It centers on a family who has desires for others. Here sexual oppression and repression are front and center with colonial oppression against the rebellious indigenous people as a backdrop.  The stringent rules on sexuality and gender roles are crafted and enforced by males.

If you are not familiar with Churchill’s work, you might be taken aback to see an unusual but not totally unique cast construct whereby some of the male characters are performed by females and vice versa and a black character portrayed by a white person.  It is how Churchill meant it to be—to keep the audience off balance to challenge pre-conceived ideas about sexuality, gender and race.

This is established at the outset but as the play progresses, we get more used to it and, therefore, more comfortable with the presentation. With no one story line, the play revolves around the multiple interactions among the characters. To summarize as succinctly as possible:

In Act I, Clive, played commandingly by Matthew Lindsay Payne, is a British colonial official who is duty bound to his country and to the queen.  He believes that sex roles are clearly defined, and when his young son Edward (energetically played by Barbara Madison Hauck) clings to a doll among his feminine characteristics and who has secretly harbored his attraction to other males, Clyde is irked and demands that Edward be as masculine as himself.

Edward alternately loves, fears and hates his father and does not want to grow up to be like him. His sister, Victoria, is represented by a dummy in the first act.

Betty, Clive’s wife, played by Tavish Forsyth with a great deal of nuance and sensitivity, is subservient to Clyde and depends on him to make the decisions.  However, when an explorer named Harry Bagley (ably played by Jonas David Grey) visits the house, Betty imagines a relationship with him, conflicted by her yearning for romance outside of the marriage and her duty to her husband.

Though on the outside Harry presents himself as a courageous British explorer, on the inside he possesses a deviant sexual appetite including having sex with Edward and the butler Joshua (played mischievously by Nick Fruit).  Harry actually misinterprets Clive’s signals and comes on to him to Clive’s revulsion.

Incensed, Clive forces Harry to marry Edward’s governess, Ellen (Kathryne Daniels) who happens to be a lesbian who fancied Betty.  Clive had earlier made a move on a visitor, Mrs. Saunders (also played by Ms. Daniels), but did not allow her to fully share in the pleasure.  Such joy!  Ms. Daniels performs in both roles splendidly.

Maud, Betty’s mother (well played by Kristina Szilagyi), is a traditionalist who insists that women must serve their husbands and take care of their homes.

The aforementioned Joshua is a dutiful man-servant, but the male-domination of the era seeps into his own behavior as he at times rude to Betty and laughs off a command by Edward. With Clive, it’s a whole different matter.

In Act II, earlier characters reappear 25 years later and some new ones are introduced. All are portrayed by different actors from the first act, again keeping the audience off balance.  There is still British colonial oppression in play as British forces are present in Northern Ireland.

Edward, now played by Tavish Forsyth, is more accepting of being gay but his on again, off again, on again relationship with promiscuous Gerry (Nick Fruit) is affected by the conflict between steady companionship (Edward) and sexual adventure (Gerry).

Victoria (Kristina Szilagyi), no longer an inanimate dummy, is a mother of a young son and not that good a one at that.  She is married to Martin (Jonas David Gray) but that marriage is on the rocks.

Victoria meets Lin and enters into a lesbian relationship providing some liberation.  Lin is played powerfully by Kathryne Daniels, fresh off her dual roles from the first act. She, too, has a child—a tantrum-prone 5 year-old named Cathy (Matthew Lindsay Payne) with a penchant for using foul language in poems.

At one point, Edward wishes he was a woman. He’s fed up with men and considers himself a lesbian, eliciting a smattering of applause from the audience. Edward, believing he is bisexual, moves in with his sister Victoria and Lin.  Betty (Barbara Madison Hauck) had split from Clive and is searching for independence.  She grows to accept Edward’s sexuality.

Iron Crow’s production of “Cloud 9” is well-directed and performance-driven.  As stated earlier, all the actors shine in executing their complex and challenging roles.  Heather C. Jackson’s costume design, especially the period attire in the first act, and Alec Lawson’s lighting design enhance the presentation.

Clearly, the second act depicts more sexual and gender freedoms than the rigid mores of the 19th century where the taboos and sex roles are more defined. The fluidity and blurring of the lines continue today, and some day we will look back at 1980 the way Caryl Churchill envisioned 1880.

You will undoubtedly find this presentation very entertaining and will challenge any preconceptions you may have about gender and sexuality.

Advisory: “Cloud 9” contains sexual situations and some profanity and is not suitable for children under 16.