Theatre Review: “Disney’s Beauty and the Beast” at Children’s Theatre of Annapolis 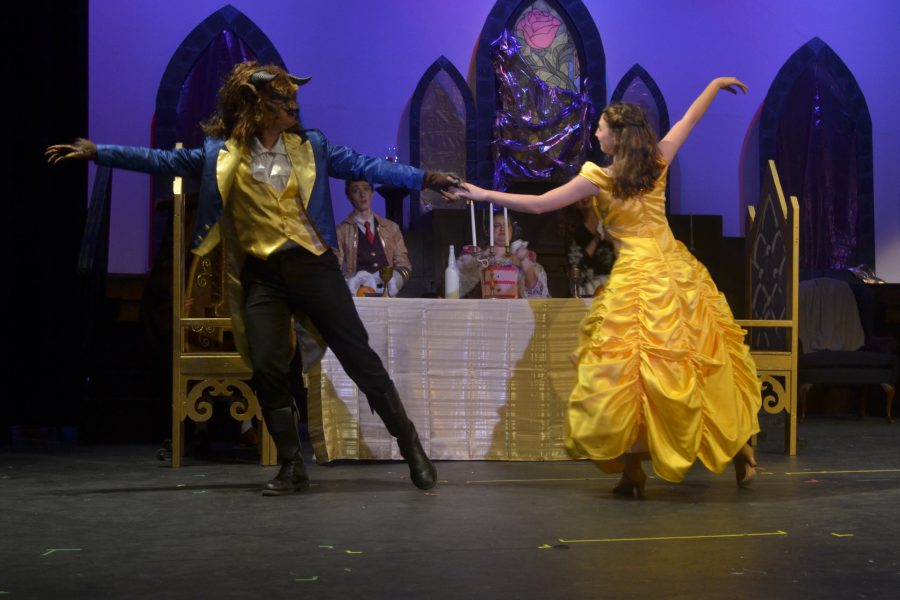 Jake Wernecke and Sarah Kalafos in “Disney’s Beauty and the Beast” at the Children’s Theatre of Annapolis.

The beloved Broadway musical “Disney’s Beauty and the Beast” is delighting new audiences at the Children’s Theatre of Annapolis. Brilliantly capturing the ‘tale as old as time,’ this splendid production, directed by Michelle Harmon Bruno, brings together talented young performers, impressive set design, creative costumes, and enchanting numbers to create a magical experience for all ages.

No matter how old you are, ‘Beauty and the Beast’ will touch your heart and fill it with happiness and hope…

All of the famous songs and scenes from the original Disney animated film are there. Music Director/Conductor David Merrill and the orchestra bring the original score of Composer Alan Menken to life as they take onlookers on an emotional journey from somber to spirited and bittersweet. Choreographer Elysia Merrill also does a fine job showcasing the talented ensemble whether they’re moving around as wolves in the woods or having a blast in the “Be Our Guest” scene.

The cast is superb especially Sarah Kalafos who is perfect as the bookish and beautiful Belle with her strong, captivating voice and sweet presence. Every song she sings is lovely especially powerful renditions of “Home” and “A Change in Me.” Playing the misunderstood Beast is Jake Wernecke, who is convincing as the gentle giant as he commands attention with moving moments such as “How Long Must This Go On?”and “If I Can’t Love Her.”

There are several performers who bring lightheartedness and laughter to the show. The self-absorbed buffoon Gaston is played with gusto by Michael Stafford, who is amusing as he flexes and fumbles in “Me” and the eponymous tune “Gaston” with adorable sidekick LeFou played by Connor Page never too far away. The happy bunch of household objects that also happen to be the Beast’s servants are highly entertaining with their own individual sparkle and include the hilarious, tightly wound clock Cogsworth played by Braden Andrew, and his animated candelabra friend Lumiere played by Drew Sharpe. Sassy Babette played by Madison Sokolowski and over-the-top Madame De La Grande Bouche played by Felicity Davis also add fun and flair. Then there’s little Chip played by Andy Rollins and his protective and doting teapot mother Mrs. Potts played by Payten Blake who charms the crowd with “Beauty and the Beast.”

The Children’s Theatre of Annapolis does a fantastic job with their latest family-friendly production. No matter how old you are, “Beauty and the Beast” will touch your heart and fill it with happiness and hope. You’ll want to get tickets and be their guest. Bravo.

Running Time: 3 hours with an intermission.

“Disney’s Beauty and the Beast” runs through January 28, 2018 at the Children’s Theatre of Annapolis. For tickets and information, click here.