Theatre Review: ‘Fiddler on the Roof’ at Compass Rose Theater 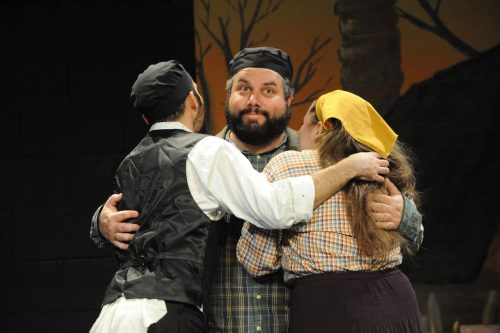 G. Michael Harris as Tevye (center) with Piers Portfolio as Motel and Stephanie Ichniowski as Tzeitel in “Fiddler on the Roof” at Compass Rose Theater.

What happens when a man’s faith is tested in a fast-changing world? This is the quandary that modest milkman Tevye faces as he wrestles with both his Orthodox beliefs and the outside factors spiraling beyond his control. As the old makes way for the new, it is only fitting that the Compass Rose Theater presents the timeless and captivating musical “Fiddler on the Roof” as the Annapolis-based company transitions from its Spa Road location to a new space later in 2018.

…do yourself a favor and honor the tradition by seeing this fine revival at the Compass Rose Theater.”

The Compass Rose production of “Fiddler on the Roof” is intentionally simple from the minimal set design and alley-style seating to the solo pianist providing musical accompaniment throughout the show. Nevertheless, Producer and Director Lucinda Merry-Browne, along with the cast’s superb vocals, the artful choreography from Andrew Gordon, and colorful costumes by Renee Vergauwen bring the fictional Jewish settlement of Anatevka in 19th century Czarist Russia to life.

The opening number “Tradition” sets a solid foundation of the recurring themes of faith, family, and the future unknown for the rest of the play. Leading the spirited chorus of villagers is the talented and animated G. Michael Harris who is excellent as the good-humored, kind, and stern patriarch Tevye. Harris is delightful to watch, effectively capturing the happiness, hurt, and hope of his character, as he deals with his three eldest daughters marrying men who don’t exactly fit his ideals, among another looming crisis. Mindy Cassle makes the perfect pairing as wife Golde with her sass, motherly strength, comedic timing, and calm contralto voice.

It won’t be surprising if classic numbers such as “Matchmaker, Matchmaker” and “If I Were a Rich Man” find their way into your imagination at a later date, with catchy earworms such as “Ya ha deedle deedle, bubba bubba deedle deedle dum,” making repeat encores in your head long after you return home.

Love blooms among the younger generation, and watching Tevye’s daughters interact with their beloveds is quite moving given the bittersweet circumstances. Especially touching is the relationship between eldest daughter Tzeitel, played by Stephanie Ichniowski, who manages to avoid an arranged marriage to a much older man and ends up with childhood friend Motel, a poor tailor played by Piers Portfolio who can’t contain his enthusiasm as he sings about the wonder of wonders in “Miracle of Miracles.” In serene contrast, “Sunrise, Sunset” stands out as a lush collective effort by the cast during the couple’s wedding ceremony.

Second daughter Hodel played by Anna Deblasio also faces disapproval from her papa, as she follows revolutionary Perchik played by Joe Mucciolo to Siberia, but before going bids a tender farewell with “Far From the Home I Love.” Finally, third youngest sibling Chava played by Marina Jansen is perhaps the most heartbreaking as she chooses Russian soldier Fyedka played by Logan Beveridge over her roots. You can feel Tevye’s loss as he laments over his ‘Little Bird,’ while she performs an exquisite dance solo during the “Chava Ballet Sequence.”

Another notable performance comes from matchmaker and busybody Yente played by Rebecca Dreyfuss, who provides lightheartedness with her wit before she must join Tevye and all the other villagers as they are sadly forced to flee Anatevka to find new homes.

There is a reason that “Fiddler on the Roof” still resonates with audiences today. So do yourself a favor and honor the tradition by seeing this fine revival at the Compass Rose Theater this season.

Running Time: 2 hours and 30 minutes with one 10-minute intermission.