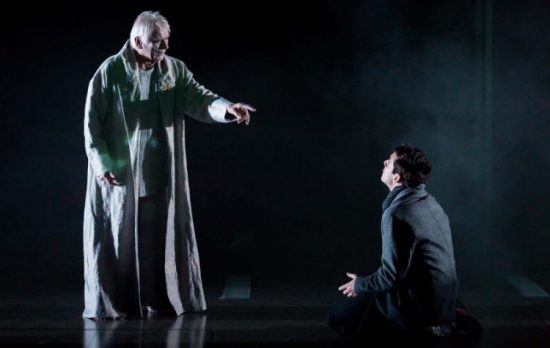 Hamlet (Urie) is visited by the ghost of his father (Baxter). Photo by Scott Suchman, courtesy of the Shakespeare Theatre Company.

“Hamlet” is the longest Shakespeare play and certainly among the playwright’s most well-known. It tells the story of Hamlet, Prince of Denmark, who returns home from university to Elsinore after his father’s death to find his mother Gertrude married to his father’s murderer, his uncle Claudius. Now playing at the Shakespeare Theatre Company, this classic has new life in director Michael Kahn’s adaptation, starring Michael Urie.

Kahn’s “Hamlet” is shockingly modern, despite using language written some 400 years ago. The Elsinore of STC’s production is a grim police state, with swastika-esque symbols looming over the stage. Many of the political entities who grace the stage wear armbands and the show is frequently illuminated by fluorescent lighting and video screens, with Hamlet (Urie) at one point knocking down a security camera before beginning his soliloquy.

It is through these video screens that the ghostly form of Hamlet’s father (Keith Baxter), the late king of Denmark, first appears, as if something out of “The Ring.” His appearance terrifies the security guards—Barnardo (Jack Henry Doyle), Marcellus (Avery Glymph), and Francisco (Brayden Simpson), and when he appears in the flesh, as it were, to the guards, Hamlet, and Hamlet’s friend Horatio (Federico Rodriguez), it is Hamlet who follows, and hears, amid the mists of another world, directions to seek vengeance for his father’s death.

Urie never stops moving – he has no sense of stillness, lending a desperate, frenetic – almost manic – authenticity to his performance.

Urie’s portrayal of Hamlet is a marked difference from the classic, staid performances of yore, the proud declamations of John Gielgud or Lawrence Olivier. Urie never stops moving – he has no sense of stillness, lending a desperate, frenetic – almost manic – authenticity to his performance. It feels, even from the early scenes, that Hamlet is poised for madness, even if he justifies it as play-acting. Urie also has an excellent sense of comedic timing, with virtually every scene of the play garnering at least one laugh, despite “Hamlet’s” status as a great Shakespeare tragedy. These characteristics may lend less weight to the character than the ponderous performances of old, but Urie’s Hamlet feels more real, and thus more interesting to watch. Hamlet has always been a character in a state of arrested development, a full-grown man unable to find his way to agency and adulthood, but in this show that is brought to fruition, revealing a man who is at turns loving and anxious and scared and brilliant and frustrated.

Without its ensemble cast, “Hamlet” would likely be a one-man show about a man driven slowly mad by his own obligations. Fortunately, the play has a number of colorful or interesting characters. There is Hamlet’s erstwhile girlfriend Ophelia (Oyin Oladejo), who in this production shows a great deal of agency and independent thought, and an astute awareness of Hamlet’s flaws. In a modern twist, she and Hamlet exchange text messages rather than letters, prompting laughter from the audience at the receipt of each note. When she goes mad in Act IV, it is strange and disconcerting, not the Romantic grief tableau of Sir John Everett Millais’ 1850s Ophelia painting. Her grief and madness are almost uncomfortable, akin to watching someone who clearly listens to a different wavelength and being unable to help.

Ophelia’s father, Polonius (Robert Joy), typically the officious, sycophantic courtier, in this show is transformed into a self-absorbed, rather bumbling figure, focused more on himself and how he can benefit from controlling circumstances around him than necessarily obsessed with pleasing his king, Claudius (Alax Cox). His famous advice (“Neither a borrower nor a lender be…This above all, to thine own self be true..”) is taken by Ophelia and her brother Laertes (Paul Cooper) with eye rolls and the typical looks of children astutely aware of how fundamentally out of touch their parents are. This portrayal is possibly a natural result of the police state this production transforms Denmark into – in a world where anyone can be killed at the king’s whim, survival is of utmost importance.

Claudius and Gertrude (Madeleine Potter) make a fascinating couple, with Claudius displaying the typical smarmy politician’s face in public and a remarkable aptitude for cruelty out of the spotlight. Potter’s Gertrude is remote, her emotion largely displayed in her love for her Hamlet, with the cold mask breaking loose completely in Act III, Scene 4, the so-called “closet scene” where Hamlet confronts her in private. That stoic facade leads to a brilliant moment near the end of the play, where Gertrude, intuiting her husband’s purpose, intentionally drinks the poisoned cup of wine meant for her son.

Any Shakespeare play can seem intimidating, especially one as long and complex as “Hamlet.” But Michael Kahn’s brilliant direction and Michael Urie’s almost frenzied, riveting performance make this one unique, and ultimately worth watching.