Theatre Review: ‘Imogen’ by Pointless Theatre at The Dance Loft on 14th 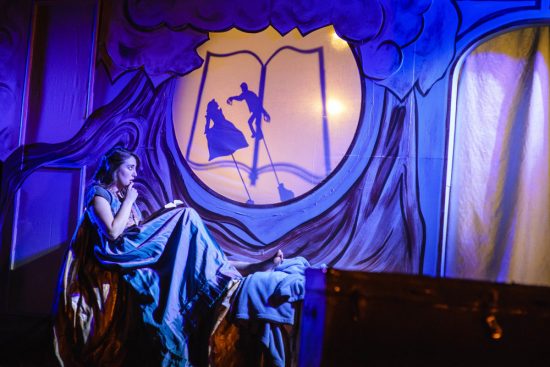 Shadow puppets, super cool fight scenes, and whirling, swirling imagery bracing a recrafted Shakespearean tale of deceit vs. innocence — um, yes please! In Pointless Theatre’s “Imogen,” stripping away the lines of convention sells the show, but not merely for the sake of being contrary, rebellious, or unconventional. Blurring conventional boundaries is not only Pointless Theatre’s forte in attitude, but also through text, theme, and beautifully quirky stagecraft. Why should the audience only witness vocalized Shakespearean text when we can relish that text embodied in stylized choreography and shadow imagery that is equally, if not more, poignant? That’s the stuff Pointless Theatre is made of, and it makes for brilliant theatre, as in this deliciously graphic show.

Why should the audience only witness vocalized Shakespearean text when we can relish that text embodied in stylized choreography and shadow imagery that is equally, if not more, poignant? That’s the stuff Pointless Theatre is made of, and it makes for brilliant theatre, as in this deliciously graphic show.

Adapted by female director Charlie Marie McGrath, “Imogen,” as part of DC’s Women’s Voices Theater Festival, reconfigures Shakespeare’s “Cymbeline” to heighten the formerly-repressed voice of Imogen, the princess daughter of King Cymbeline, wading through a complex journey of self-authenticity. What’s peculiar about Shakespeare’s original text is that Imogen’s lines are more than double the lines of the original title character, yet her story seems overshadowed. Under the guise of a disjointed fairy tale, McGrath highlights Imogen’s path, beginning with her elopement to Leonatus, a member of King Cymbeline’s court. Heartbreakingly, King Cymbeline invalidates the marriage and banishes Leonatus to Italy, for he is not of royal blood. There, Leonatus meets cocky Iachimo who wagers that, with the right amount of sweet talk, he can prove Imogen unfaithful. From there, the lies and deceit begin!

A skillful and experienced cast of actors wield remarkable depth and creative interpretation in this show. Katelyn Manfre as Imogen conveys the beauty and breadth of Imogen’s journey with masterful emotional range. Hilary Morrow, one of my faves, carries a grand, unforgettable presence as both the evil Queen and King Cymbeline — within seconds of each other. She’s the sauntering, sadistic queen stepmother seeking to poison the unsuspecting Imogen, and in a blink, she converts to King Cymbeline, a miniature puppet, and truly becomes him, voice and all. Alex Turner as Leonatus, Imogen’s beloved, infuses his role with a moral purity that is charmingly noble; however, at the convincement of Imogen’s alleged adultery, Turner’s fierce, vengeful anger will surprisingly jar you. Opposite of Leonatus is Kiernan McGowan’s convincingly cunning Iachimo, a lusty schemer with disturbingly roaming hands, who’s a pleasure to watch.

Intensity and exaggeration color the technical aspects of this production along with other inventive elements. Punctuated sequencing of spotlights and freeze frames highlight asides. Powerful sequences of stylized choreography and lighting effects, especially in the war scene, penetrate the senses and heighten the emotional story along the scenes, thanks to Choreographer Ryan Sellers and Lighting Designer Mary Keegan. Julie Cray Leong’s curious costume design blends classical with contemporary, with a special nod to her styling of the evil Queen’s voluminous gown and its rather, ahem, peculiar stitching.  Patti Kalil’s set design is a standalone work of abstract art that stimulates wonder the moment you enter the performance space.  Puppet Designer Matt Reckeweg’s shadow puppets are also an impressive feature, uniquely underscoring emotion and dialogue with visual storytelling throughout.

Live music from Music Director Michael Winch and musician Jonathan Een Newton are the cherry on top of this amazing show. Expect anything from folk strings to jazzy swings.

“Imogen” shows on Thursdays through Sundays from January 20 – February 11 at The Dance Loft on 14th in Washington, D.C. For tickets and information, click here. For more information about The Women’s Voices Festival, click here.