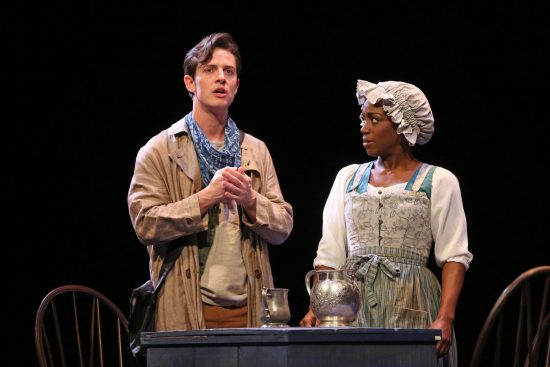 Directed by Nataki Garrett, this thought-provoking play is about a young Quaker shoemaker named Christian who splits from his family to join the Revolution. Having made a pair of boots for his hero Thomas Jefferson, Christian travels to Virginia to nobly offer his services to aid in the battle against the British.  In order to do this, Christian must lay down his sewing needle in place of a rifle. Having fallen in love with a black slave, Susannah, Christian’s dreams of liberty for all is put to the test in this multifaceted drama.

Across the course of the drama, Christian (Christopher Dinolfo) and Susannah (Felicia Curry) cross paths with Sally and James Hemings (Kathryn Tkel and Michael Kevin Darnall), Thomas Jefferson (Michael Halling), Patrick Henry (Maggie Wilder), George Mason (Christopher Bloch), and others.  The ensemble is rounded off with Kimberly Gilbert as Martha and Nelly Rose and Thomas Keegan as Harry and Madison.

The strong ensemble of performers creates a genuine sense of unity, all while telling the story about a country that is divided. Despite characters that could have been written to be more developed, the actors give steady performances.

A particular important and memorable scene is when James, a slave of Thomas Jefferson, is at Monticello secretly teaching Sally, also a slave of Jefferson, their own, revised version of the Declaration of Independence.  Actor Michael Kevin Darnall as James delivers the lines with conviction about the dream of freedom for all, while actress Kathryn Tkel as Sally successfully portrays a wanting of the dream, but is grounded in reality by learning and memorizing both versions.

The strong ensemble of performers creates a genuine sense of unity, all while telling the story about a country that is divided.

The title of the play, “Jefferson’s Garden,” refers to the Edenic garden located at Thomas Jefferson’s home, Monticello in Charlottesville, Virginia.  Digging deeper, one might conclude that the people who live and breathe in Jefferson’s garden represents the seeds that he has planted, or indeed his America.  How long will it take before seeds of freedom bloom for all?

The overall look of the play is simple and clean, enabling the time periods and locations from the Revolutionary battlefields to Paris to Thomas Jefferson’s home, Monticello to move as smoothly as possible. The stage consists of two costume racks on stage with chairs for the performers to sit, waiting for their entrance.  Black stage cubes and wooden frames are moved by the performers to make up the set, designed by Milagros Ponce de León.  Ivania Stack designed the costume pieces to be able to be put on in front of the audience quickly and without hassle.

Wertenbaker’s script is jarring at times.  Not just with the different time periods and underdeveloped characters squeezed into a fat two act, but with a few lines delivered directly to the audience that are seemingly out of place. The line delivered to the audience at the top of the second act was cheesy at best, and beneath the seriousness of the theme of the play.

“Jefferson’s Garden” may be a work of historical fiction, but it seeks to explore real questions about America’s battle for independence and its failure to ensure universal freedom in its constitution.

Running Time: Two hours and 30 minutes, including one 15-minute intermission.

Advisory: Adult language and some violence.  Recommended for ages 15 or older.