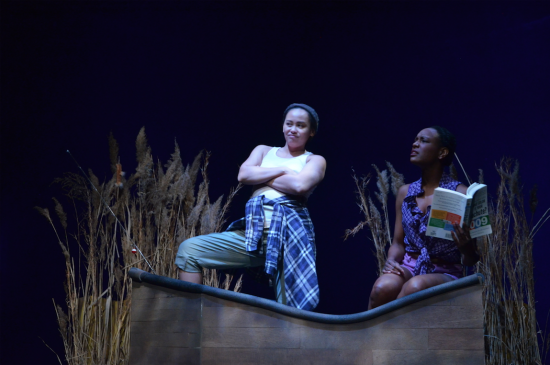 For all the world-saving stakes of modern entertainment, there remains no theme more fascinating than the inner workings of the human heart. This theme is thoroughly examined in “Love is a Blue Tick Hound,” a collection of four twenty-minute plays written by Audrey Cefaly, which made their regional premiere on January 12th with Rapid Lemon Productions. The show will run until January 21 at the Baltimore Theatre Project and then from February 9-17 at the Logan Fringe Arts Space in Washington, DC. Each of the four plays has only two characters and examines the nuances of human relationships and the limitations we set for ourselves.

Directed by Donna Ibale, “Fin & Euba,” is a simple yet sincere portrayal of two Southern women struggling to find identity in a world that seems keen on crushing their souls. Fin (Carolyn Koch) and Euba (Lauren Erica Jackson) relax in their gnome-filled yard after a long day’s work, smoking cigarettes and sipping from cans of Pabst Blue Ribbon. Carolyn Koch and Lauren Erica Jackson work wonders portraying the fact that though their characters have sharply contrasting personalities, they both want the same thing – escape. As the play is very quiet, I felt that some silences dragged on a bit, but it was punctuated by several very intense moments of conflict, keeping the audience enthralled.

Next was “Clean,” which was directed by Lee Conderacci. Charming, engaging, and just a tad unsettling, this short play featured Betse Lyons as Lina, a waitress, and Justin Johnson as Roberto, Lina’s coworker. When Roberto discovers Lina lying on the floor in the midst of an existential crisis, he attempts to comfort her, leading to intense philosophical ruminations about careers and relationships. Lyons and Johnson make the perfect pair, working together to deliver moments of genuine hilarity and bitter conflict with equal dexterity.

Betse Lyons proved to be a multi-faceted artist with her direction of the next play, “The Gulf.” Kendra (Donna Ibale) and Betty (Aladrian C. Wetzel) struggle to keep their relationship afloat during a fishing trip in the Gulf of Mexico. Though there were effective comedic decisions throughout, I felt that some of the more serious moments fell short. However, both Donna Ibale and Aladrian C. Wetzel did wonderful jobs conveying their complicated relationship through subtle body language and vocal inflections. A part of this production that stood out was set designer Reese Siedlecki’s simple yet clear representation of a boat in shallow, marshy waters. Thin sheets of plastic surrounding the boat cleverly created the illusion of stagnant water, while the boat itself was the perfect size for the two characters and completed the image of a coastal lifestyle.

The last and, in my opinion, the most entertaining piece was “Stuck.” Directed by Lauren Erica Jackson, this play surrounds two timid yet unique individuals who are on their first “real” date after meeting online. Mike Smith had the audience in hysterics as Bob, a nervous man eager to impress the energetic Maggie (Lee Conderacci). The majority of the play has a much different tone than the preceding three, although its approach is lighthearted it still manages to address the conflicts between peoples’ hopes and their realities. Lee Conderacci has an infectious smile and a seemingly infinite supply of energy, which she uses to make Maggie an engaging and likable character. Mike Smith impeccably portrays Bob’s complex emotional turmoil with animated soliloquies, creating a many-layered veneer of confidence.

An interesting aspect of the shows was the decision to clothe each character in one color, with a couple of exceptions, which emphasized their image as isolated individuals. Overall, the four directors were quite successful in maintaining a cohesive tone whilst exploring the unique relationships in each play. Audiences who see the shows in February at the Logan Fringe Arts Space will be intrigued by the high quality of acting and directing talent, as well as the simple but effective sets, costumes, and lighting.