Theatre Review: ‘On Your Feet!’ at The Kennedy Center 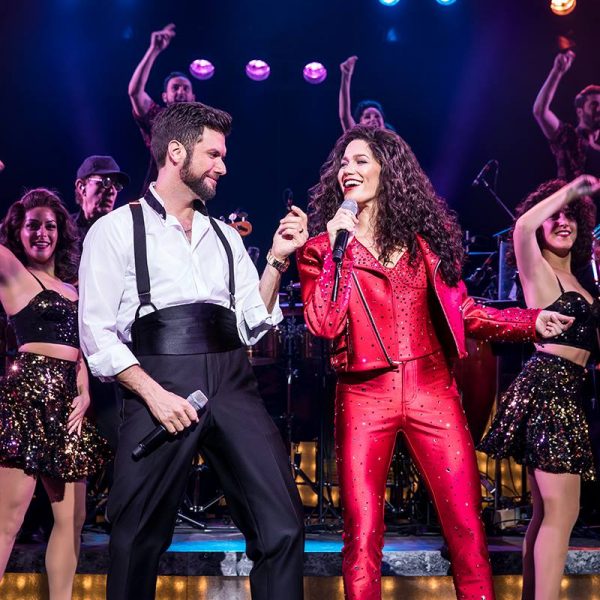 Mauricio Martínez as Emilio Estefan and Christie Prades as Gloria Estefan in “On Your Feet!” at The Kennedy Center. Photo by Matthew Murphy.

It’s one big fiesta the moment the first beat hits in “On Your Feet!,” the smash musical that follows the incredible story of Gloria and Emilio Estefan and their massive success with the Miami Sound Machine. After its original Broadway run, the lively production written by Academy Award winner Alexander Dinelaris and directed by two-time Tony Award winner Jerry Mitchell takes to the Opera House stage of The John F. Kennedy Center for the Performing Arts, for an electrifying Washington, D.C. engagement.

…’On Your Feet!’ is a whirlwind of fun and one of the hottest tickets in town.

Before catchy songs such as “Rhythm Is Gonna Get You” and “1-2-3” made their way to mainstream airwaves and the Billboard charts, young Gloria lived a simpler life with Cuban immigrant parents in the Little Havana section of Miami. Eventually, the future international superstar would find her calling, but not before facing a few personal setbacks.

“On Your Feet!” brings the audience along for a vibrant retelling of the Estefans’ journey with stellar cast performances, music direction by Clay Ostwald from the Miami Sound Machine, spirited choreography by Sergio Trujillo, and eye-catching eighties ensembles from Costume Designer Emilio Sosa. Noted Scenic Designer David Rockwell, along with Lighting Designer Kenneth Posner and projections by Darrel Maloney, create an authentic sense of place spanning Cuba and small Florida nightclubs to concert venues around the world, a bar mitzvah, an Italian wedding, and even the American Music Awards, among other artfully curated settings.

Embracing the role of Gloria Estefan with grace and enthusiasm is Cuban-American Broadway actress Christie Prades whose impressive vocals make everyone just want to sing and dance along with her—and they do. At her side is stage and television actor Mauricio Martínez as Emilio Estefan, a fitting choice who effortlessly projects the producer’s charisma, business swagger, sense of humor, and most of all, loyalty and love for his life partner. Several numbers underscore the beauty of their relationship but perhaps one of the sweetest moments is when Prades and Martínez sing “I See Your Smile,” capturing Gloria and Emilio’s growing fondness for each other in those early years.

“On Your Feet!” is also very much the story about relationships, not just between Gloria and Emilio, but also the strong bonds behind the scenes with her family. For Gloria, her grandmother, or abuela, played by Alma Cuervo, who created the role of Consuelo Fajardo on Broadway, and her mother Gloria Fajardo, played by Nancy Ticotin, add a contrasting dynamic to the singer’s life and fame, and it’s interesting to watch their interaction. In particular, Ticotin as Gloria Fajardo, shines in a flashback scene in Cuba where she commands the stage with a marvelous show-stopping performance of “Mi Tierra” and again in the touching duet “If I Never Got to Tell You” with Martínez, as an unexpected twist of fate brings them closer together. Another captivating character is Gloria’s ailing father José Fajardo, played by Jason Martinez from “Jersey Boys,” who gives an emotional performance with “When Someone Comes Into Your Life.”

In the end, everything brilliantly comes together in the phenomenal “Mega Mix” that has the crowd—even the most conservative in the bunch—moving to the music and bursting to join the happening party. “On Your Feet!” is a whirlwind of fun and one of the hottest tickets in town.

Running Time: Approximately 2 hours and 30 minutes with one intermission.