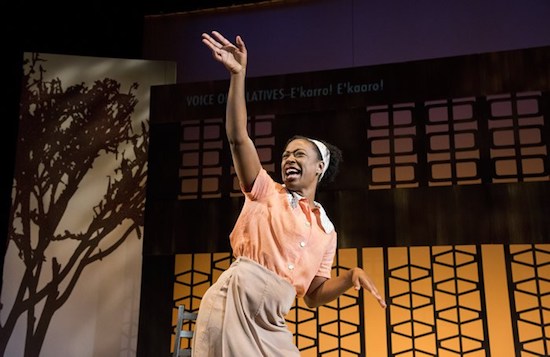 As there is no shortage of talent in Washington, DC, the Mosaic Theatre Company has elected to promote and support local artists in addition to continuing the conversation about subject matter that directly impacts those in the greater Washington metropolitan area by commissioning works written, directed, and performed by locally grown talent in an initiative entitled “Locally Grown Mosaic.” In its first iteration, the Mosaic Theatre Company has enlisted the talent of local playwright, actor, and director Caleen Sinnette Jennings. A founding member of the award-winning playwrights’ collective, The Welders, eight of her plays have been published by the Dramatic Publishing Company and her play “Queens Girl in the World” was so well received in 2015 that its run at Theater J was extended. Jennings’ work has been commissioned (and honored) by the Kennedy Center and she is currently on faculty at American University.

The Mosaic Theatre Company, known for its socially and politically relevant material, has continued its mission in its fifth production of the company’s third season. The follow-up to “Queens Girl in the World” (and Mosaic Theatre Company’s contribution to the second Women’s Voices Theatre Festival), the semi-autobiographical “Queens Girl in Africa” tells the story of teen angst, identity, and first love.

Everything about ‘Queens Girl in Africa’ is simply superb…

Written by DC playwright Caleen Sinnette Jennings, directed by Paige Hernandez, and starring Helen Hayes award winner Erika Rose (“Unexplored Interior [This is Rwanda”], “An Octoroon,” “Mr. Burns: A Post Electric Play”), this wonderful (one woman!) work perfectly encapsulated the inner feelings of an African-American teen living in civil war-torn Nigeria. Erika Rose plays Jaqueline, a young African-American girl who was involuntarily transplanted to Nigeria due to a job offer her father (a personal friend of Malcolm X) simply could not refuse. As Jaqueline is torn away from everything she loves and holds dear, including her beloved Bob Dylan, she must force herself to cope with her new surroundings, make sense of the world around her, and cope with the fact that America, the very country that has oppressed her and her ancestors for generations, is the very country that protects her in Nigeria.

Amongst other things, a singular highlight was Rose’s ability to fluently and realistically flow from dialect to dialect as if she, herself, had been born a West Indian/Igbo/South African in a past life; her commitment to performing each character in the most realistic sense is certainly a testament to how seriously she takes her craft.

Everything about “Queens Girl in Africa” is simply superb, from the writing (which ran rampant with absolutely gorgeous prose) to the acting (I’m still in awe regarding Rose’s ability to play such a vast array of different characters flawlessly) to the imaginative set design and use of 1960s era music (which played before the show began) to ease audience members into a long past, albeit not forgotten, time in American and Nigerian history.

“Queens Girl in Africa” runs through February 4, 2018, at the Atlas Performing Arts Center. For tickets and more information, click here.