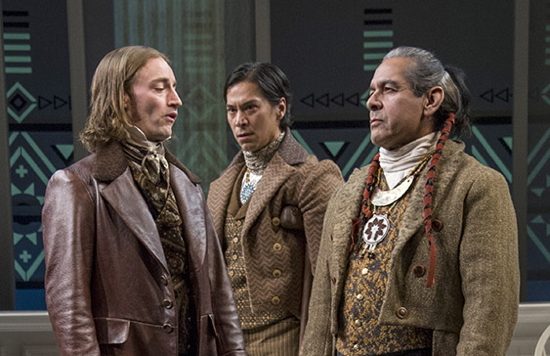 Think back. When was the last time you visited the theatre and experienced a show starring Native Americans? “Annie Get Your Gun” does not count. Now think back and tell me when was the last time you saw a play written by and about Native Americans? If the answer to either of those questions is “I haven’t” or “I can’t remember” you should definitely see this play. Even if the answer is “just yesterday” to either of those questions you should still go see this play!

The parallels between the past and present in this play are beautiful and heart wrenching, often at the same time.

Directed by Arena’s Artistic Director Molly Smith, “Sovereignty” by Mary Kathryn Nagle is a brilliant play about the relationship between the Cherokee Nation and their land. The plot shifts between the near future of a Cherokee reservation to 1830s America. Sarah Polson, the headstrong female lawyer who returns to the Cherokee nation to make a difference in the lives of Native American women by supporting the Violence Against Women Act. The only problem is that she’s a Ridge, descended from the family of Native Americans who ultimately ceded the original Cherokee land in Georgia to the government.

This is a play is one that delves into an actor’s range. Television and film actress Kyla Garcia stars as Sarah Polson. Garcia brings a passion to a role that is inspiring to watch.  Kalani Queypo makes his Arena Stage debut as John Ridge, the ancestor to Sarah and the impetus behind her passion for the idea of Native American sovereignty. The fact that Queypo excels in his portrayal of a Native American leader should surprise no one, Queypo is a founding member of SAG-AFTRA’S National Native American committee.

Jake Hart alternates between Sarah’s lovable brother Watie and Elias Boudinot, the editor of the Cherokee newspaper “The Phoenix.” He expertly navigates between the low brow humor of a cop to the intellectual leader of a national newspaper.

Joseph Carlson is chilling as the savage Andrew Jackson but it’s in his portrayal of Ben, Sarah’s naïve but initially likable white fiancé where the true terror lies.

Ken MacDonald, who recently designed “A Thousand Splendid Suns” at San Francisco’s American Conservatory Theater, lends his technical artistry to the set of this play. The set design, inspired by Cherokee artists is a static white set that moves around the actors and changes with lights designed by Robert Wierzel.

Linda Cho designed the costumes which range from beautiful period pieces of dusty browns to pieces that are obviously inspired by history, but borrow heavily from modern styles, perfect for a play with one foot in the 1800s and the other in the 2000s. Cho plays around with texture, giving the slimey Andrew Jackson a smooth leather duster and Elias Boudinot, the character grappling with his identity as a Native American and a Christian. The center of the whole play, Sarah is costumed in a bold red dress and suede knee-high boots to show her courageous spirit.

The parallels between the past and present in this play are beautiful and heart wrenching, often at the same time. It unpacks this world of dualities- Cherokee and White, past and future, Ross and Ridge. It’s an amazing journey.

Running Time: One hour and forty-five minutes with one 15 minute intermission.

“Sovereignty” plays from Jan. 12 to Feb. 18, 2018, at the Arena Stage. For more information or to purchase tickets online.