Theatre Review: ‘The Skin of Our Teeth’ at Constellation Theatre 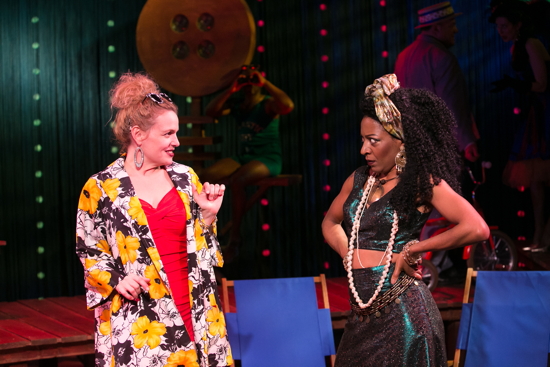 Tonya Beckman (Sabina) and Lilian Oben (Fortune Teller) in The Skin of Our Teeth. Photo by Daniel Schwartz.

At the end of this clever, engaging play by Thorton Wilder (Pulitzer Prize, 1943), I was left wondering if this had been the genesis of the idea for Dr. Who. While there is no proof of this, there are prescient parallels in the time travel, the sense of danger, and the saving of humanity “by the skin of our teeth.” Humanity has needed a lot of saving, as this play makes clear. If there is a divine presence, it may seem like the same-old, same-old, but to the constantly replenishing generations of humanity, we’re living on the brink.

But this is an absurdist play with some serious underpinnings…

The play focuses on three discrete major shifts in the history of the world that could bring about the end of humans—the last great ice age (existing in time simultaneously with the Great Depression), the Flood, and a world war. The long-lived, and long-suffering, protagonists are Mr. George Antrobus and Mrs. Maggie.

Antrobus, deftly and deliciously played by Steven Carpenter and Lolita Marie; their children Henry (Cain, actually, but nobody really wants to talk about that because of the whole unfortunate “accident” with his brother) winningly played by Dallas Tolentino; their daughter Gladys, beautifully portrayed by Malinda Kathleen Reese, balancing forever on the brink of childhood and awakening; and Sabina (or Lillith), brilliantly acted by Tonya Beckman. The rest of the ensemble—eight, plus four understudies—throw themselves whole-heartedly into the production and into the identity code-switching that is an integral part of this absurdist whole. They deftly play triple roles as actors and crew and then crew drafted into roles as actors. It can get confusing. But don’t worry about why a dinosaur and mastodon are the pets of the Antrobus family during the simultaneous Ice Age/Great Depression; just appreciate the wonder of these species even as they careen toward extinction as the humans keep clawing forward.

But this is an absurdist play with some serious underpinnings, and the cast is certainly up to the task of letting this story unfold in the three major time periods (or six, when you consider that each ancient time period is paired with a relatively modern one that sort of echoes the ancient period). Asking characters to represent humanity is daunting; it’s almost a relief when the couple celebrates their 5,000th-anniversary because the thought of a marriage that long is unnerving. Each of the characters represents aspects of humanity—male, female, good, evil, youth, age, hope, despair, fear, courage.

It’s obvious that humanity keeps making many of the same mistakes over and over and that its baser nature is continually at war with what is needed to survive and thrive. It can be a depressing litany of the same sins and shortsightedness that dogs humanity’s heels. So depressing that at times the cast breaks the wall and speaks directly to the audience, necessitating stage manager intervention, as certain players (most notably and comically Sabina) just really, really don’t want to continue with the lines because the audience gets it and let’s just move on, shall we. It’s a technique used often enough to bring some needed laughter and sparely enough to not become cloying.

But Thornton Wilder leaves the audience with hope. His play is an explosive exploration of extinction events, and each time, humanity manages to eke out a win in the sense that the species survives and progresses, technically, mentally, emotionally, toward the future. The story’s not done, but we DO manage to hang on, and sometimes learn something real, so maybe we can survive whatever extinction event is looming now. It’s a kind and generous and surprisingly gentle ending.

“The Skin of Our Teeth” is directed with a light touch by Mary Hall Surface; the actors just seem to inhabit these characters, and the pacing is superb. The production is ably supported by the inspired costumes of Frank Labovtiz (the fortune-teller’s flowing, iridescent skirt and top elicited some gasps from the audience), the scenic and lighting design of A.J. Guban, and the puppet designs of Matthew Aldwin McGee.

You might leave just wanting to take the dinosaur and mastodon home with you to keep them from extinction. Because it seems that humanity might, just might, muddle through one more time.

Running Time:  2 hours and 30 minutes plus a 15-minute intermission.

“The Skin of Our Teeth” runs from January 11 – February 11, 2018, at Constellation Theatre in Washington, DC. For more information, click here.