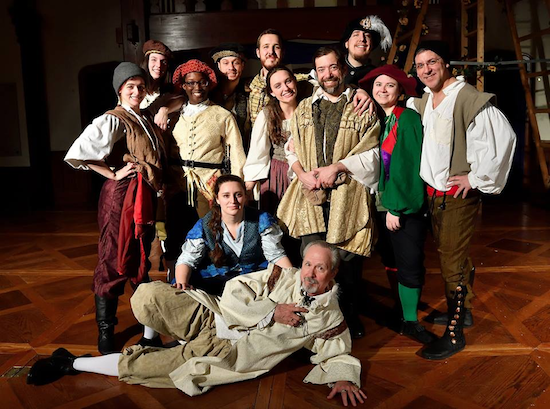 The cast of The Tempest. Photo by Will Kirk.

Baltimore Shakespeare Factory (BSF) is a theatre company like no other. As one of the cast members, Sian Edwards, announced before the show, BSF follows a few conventions in their performances that aren’t exactly typical of modern theatre: they leave the house lights on, they use gender-blind casting, they incorporate music into the production, and they interact with the audience quite a bit. As Edwards explained, these customs serve to create a theatrical experience wherein the audience is allowed to be a part of the storytelling; we’re not just passive observers, sitting in the dark of the theatre, but active participants, visible to one another. We are an important part of the story. Through their creative and unique approach to storytelling, BSF manages to present “The Tempest” in a way that is fresh, entertaining, and accessible—whether you are a lifelong Shakespeare lover or a first-time theatre-goer.

“The Tempest” opens with a great storm overtaking King Alonso of Naples’s (Jim Hart) vessel as he and his crew are returning from his daughter’s wedding. The ship crashes onto an island inhabited only by Prospero (Zach Brewster-Geisz), a former Duke of Milan, his daughter, Miranda (Nell Quinn-Gibney), and their servant, Caliban (Dean Carlson), a native of the island.

From there, various subplots emerge. We learn that Prospero’s dukedom was usurped by his brother, Antonio (Jonathan Miot), one of the men who has become a castaway on the island and that Prospero was cast out twelve years prior to the events of the play. As the story progresses, we learn that he is a magician who is using his power to manipulate those on the island with him, secretly orchestrating misunderstandings and even conspiring to make his daughter and King Alonso’s son, Ferdinand (also played by Dean Carlson), fall in love. He is assisted in this subterfuge by Sian Edwards as the island spirit Ariel, whom he promises to free after the plot is finished.

Brewster-Geisz’s Prospero was one of the highlights of the show. He played the character with a fabulous complexity, exploring the dichotomy between his rage and his composure, his selfishness and his compassion, while at the same time creating a portrayal with which the audience could unequivocally sympathize. Quinn-Gibney’s Miranda was similarly noteworthy; though her portrayal was incredibly sweet and endearing, she also allowed Miranda to have a refreshing amount of intelligence and dignity.

Through their creative and unique approach to storytelling, BSF manages to present “The Tempest” in a way that is fresh, entertaining, and accessible—whether you are a lifelong Shakespeare lover or a first-time theatre-goer.

Perhaps the most stunning performance of the night, however, was given by Dean Carlson, who rose to the challenging task of portraying both the (for lack of a better term) savage islander Caliban, and the much more refined prince Ferdinand. According to director Marshall B. Garrett, this choice was made to demonstrate the stark differences in how these two characters are treated and viewed based on their societal and economic standings, and it showed. Though the two characters were distinguished only by one or two costume pieces, I didn’t even realize until the intermission that they were being played by the same actor. Carlson brought both characters to life brilliantly, despite the fact that he had to switch between them so often and so quickly. His portrayal of Caliban was especially wonderful, as he managed to portray the character as frighteningly brutish while still finding opportunities to show him as more sympathetic and expansive than is immediately apparent. The monologues in which he speaks of the island’s wonder were particularly moving—while the scenes where he drinks with Trinculo and Stephano (Nina Kraus and Jeff Miller) were utterly hilarious.

The production was also very accessible and easy to understand. I saw the show with a guest who had never read or seen any version of “The Tempest” before, and she was able to accurately recount almost the entire plot to me on our way home. Part of this accessibility came from the cast’s clear understanding of the story and of Shakespeare’s writing; they were able to emphasize just the right words and create the subtlest of movements to indicate what was happening and to make the story comprehensible to everyone in the audience.

Other highlights of the show included the music, composed and arranged by Jamie Horrell. The original songs were lovely and set the tone of the show well, and the covers of pop songs, though at times a little too silly for my taste, were nevertheless fun for both the audience and, it seemed, the cast. The audience interaction was also extremely entertaining; there’s something delightful about an actor talking directly to you or sitting down beside you. It’s a subtle reminder that you, too, are in the world of “The Tempest,” that you, too, are on the island, amongst the spirits and the castaways and the lovers. It is a reminder that theatre is about telling a story, and the audience is just as much a part of that experience as that cast.

Running Time: 2 hours and fifteen minutes with one intermission.