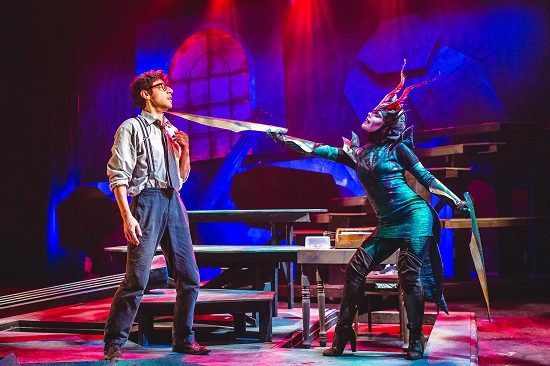 Shu-Nan Chu as Josef K and KathyGordon as Leni in ‘The Trial.’

Synetic’s production of “The Trial” by Franz Kafka, grabs you by the throat and doesn’t let go. This is a grim, dystopian show that is all too relevant. Considering that shows are usually chosen a season in advance, this is prescient. Don’t miss this production; this is an innovative and sublimely creepy important work that will nail you to your seat as you find yourself trying to make yourself smaller so no one’s accusing eyes alight on you. This is also a show that will stay with you, giving you food for thought later, and plenty to discuss.

In this frightening, fractured world, a writer, Joseph K (Shu-nan Chu), has writer’s block and inspired by a giant cockroach romping on his desk, writes himself into a nightmare story of a giant insect hive, where he is accused of an unknown crime by unknown people and never actually faces the unknown court. He has no defense but his innocence and that is simply not enough in this world of alt-facts, communication that is an IED minefield, and alliances that dissolve by the minute.

Synetic’s production of ‘The Trial’ by Franz Kafka, grabs you by the throat and doesn’t let go…Don’t miss this production…

The two guards Willem (Chris Willumsen) and Franz (Thomas Beheler) are brutal and sly, slithering away from any light as any good cockroach would do. Ryan Tumulty plays the Inspector, Judge, Priest, and the lawyer Huld, and he inhabits each personality with distinction. As the lawyer Huld, he literally sucks blood to survive, and that blood comes from his “clients,” few of whom survive. Careering around the stage on an electric scooter, he uses the scooter and his mass and a honeyed tongue to bend Joseph K to his will, and to the pre-ordained finish.  Kathy Gordon plays three parts–the Clerk, Mrs. Grubach the landlady, and most chillingly, Leni, Huld’s assistant. She is seductive, gliding like a demented panther around the stage, snaring the clients for Huld and then helping to drain them.

Tori Bertocci plays Anna, his neighbor who is suspect because she works at night as a bartender; she is drawn into this nightmare because her room is near his in the boarding house, but in this world she can’t afford to be involved. Lee Liebeskind portrays his Uncle Karl, who introduces him to Huld, insisting that Joseph K needs a lawyer; he is the Judas to Joseph because he betrays him to Huld and the court to buy himself a moment longer of life. In the end, he chooses to call himself a man, not a dog, and sacrifices that time. You feel sorrow for Uncle Karl, even as you want to brush him away. Compare that spark of humanity toward Karl with the fear and loathing that Tumulty inspires as any of his characters, but especially as Huld the lawyer. You might need him, you might underestimate him as so many do people who are in scooters and wheelchairs, but this is a character with no redeeming values, and Tumulty portrays that brilliantly.

Under the sure direction of Paata Tsikurishvili, the actors bring to life this dark, dreary, infested world. Survival is everything and each will do anything to ensure his/her own. Fittingly, their humanity is gone.

The resident composer for this production is Konstantine Lortkipanidze and his work epitomizes the dank, dark, casual cruelty of this vision. It never intrudes, but sets the tone and never lets up.

The costumes designed by Erik Teague are brilliant. They could be cumbersome, but the actors use the wings and insectile projections as naturally as they would their hands. It’s unnerving and adds to the nightmarish quality of this rabbit hole that Joseph K has fallen into.

The set, designed by Daniel Pinha, is big and brutal and dark grey–it’s a cold, lonely place. You can see the weight and the way it sucks up light slowly demolishing any hope that Joseph might have of proving, well, who knows what.  It leaves him defenseless. It leaves the audience defenseless too and wondering what they would do in such a circumstance.