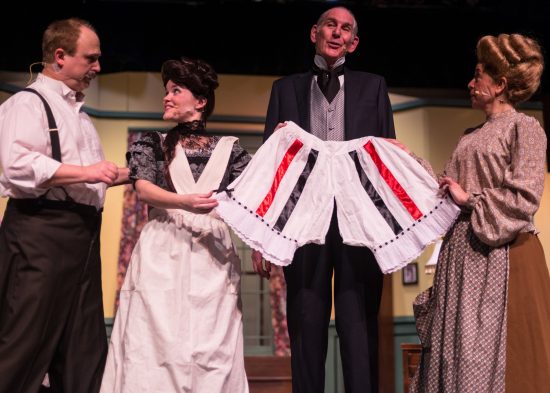 “Desire adjusts morality.” This line in “The Underpants,” Rockville Little Theatre’s current production, is central to the plot and drives the farcical action. The wry and satirical comedy is now playing through February 4th at The F. Scott Fitzgerald Theatre in Rockville Civic Center Park.

Fleming helms a cohesive and enjoyable production that makes you both think and laugh heartily.

Adapted by American comedy icon and playwright Steve Martin, “The Underpants” is a play by Carl Sternheim. The story unfolds in 1910 Dusseldorf, Germany with a scandalous event as the catalyst: Theobald Maske (Phillip Hosford), upstanding government employee and proud German citizen, has been humiliated by his much younger wife, Louise (Alexandra Guyker.) What was the source of embarrassment? During a parade featuring the King, Louise’s underpants fell down around her ankles. Even though Louise assures him that barely anyone noticed, Theo is convinced that his job and entire way of life is in jeopardy, as the best civil servants are thoroughly average and avoid notice at all cost. The audience is made to feel that Theo’s overreaction is ridiculous… until not one, but two men show up to rent the Maske’s spare room, inspired by a mere glimpse of Louise’s undergarments. One is an overly amorous gentleman poet, Frank Versati (Zach Pajak) and the other a hypochondriac barber, Benjamin Cohen (Mickey MacIntyre.) There is also another mysterious man sniffing around the apartment (Stuart Rick.)

Compounding the trouble is the Maske’s other lodger, the nosy upstairs neighbor Gertrude Deuter (Jill Goodrich,) who eavesdrops on all the happenings downstairs. When she hears that Theo has not been performing some of his “husbandly duties,” she conspires with Louise to encourage an affair with Versati. Events loop back to Lousie’s underpants, as Gertrude decides to make her a sexy affair-worthy pair; but Gertrude and Lousie have no idea what is in store.

At its heart, “The Underpants” is a sex comedy; however the comments it makes on the dynamics between men and women, resonates today. The super-repressive ideas represented by Theo make the representation of these values in today’s society seem ridiculous and outdated. While it makes commentary on gender dynamics and sex, it is also just plain funny and is in excellent hands here.

Rockville Little Theatre and director Karen Fleming’s production of “The Underpants” is smart, funny, and well-acted. They hit all the right beats with both the comedy and commentary and are able to bring the audience along for both without being too heavy-handed. Hosford leads the cast with his nuanced performance of nincompoop Theo; his bombastic performance is almost as epic as his mustache. Guyker charms as the confused and frustrated Lousie, gaining the audience’s goodwill as a young woman just looking for a bit of love and attention. Goodrich plays the busybody neighbor to perfection and Pajak is hilarious as the oily Versati. MacIntyre brings a Jerry Lewis like manic comedy to Cohen and Rick brings the right combination of mystery and buffoonery to Klinglehoff.

The production value of this show is also excellent; the set is consistent throughout, and there are several clever vignettes set to lively polkas to break up each scene. (Set Design by Bill Dunbar and Sound Design by Nick Sampson.) The period era costumes were divine and the titular underpants executed perfectly (Costume Design by Elizabeth Dasbach.) Fleming helms a cohesive and enjoyable production that makes you both think and laugh heartily. It is a comedic romp for adults looking to be engaged and entertained on a variety of levels.

Advisory: Because of adult situations and language, this show is suggested for audiences ages 16 and older.