Theatre Review: ‘The Way of the World’ at Folger Theatre 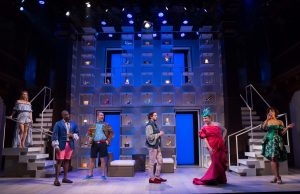 Actor Ashley Austin Morris and costume designer Linda Cho are the true stars of “The Way of the World,” Theresa Rebeck’s new comedy of the indiscreet, charmless One Percent currently running at the Folger Theatre.

The play, an update of William Congreve’s 1700 work for the Women’s Voices Theater Festival, can boast of strong performances, a starkly gorgeous set by Alexander Dodge, and thoughtful direction by Rebeck. Its weakness is in the text itself, which is not as taut as Rebeck’s strongest works, and which seems in need of revision.

…can boast of strong performances, a starkly gorgeous set by Alexander Dodge, and thoughtful direction by Rebeck.

“The Way of the World” is a comedy of manners about that strange species of ultra-rich that have scads of money and yet seem to have done nothing to earn it, nor to do anything much at all. Twentysomething Mae (Eliza Huberth), a bit more down-to-earth than her peers, feels like she should do something with the $600 million that birth has granted her, and has her eye on Haiti, not The Hamptons. Her sometime-beau Henry (Luigi Sottile) has done her wrong and wants her back — but even he is not sure if it’s Mae’s money or Mae that is the real attraction.

That’s the gist of our tale, with vapid villains played by Erica Dorfler and Brandon Espinoza flitting in and out, stealing each of their scenes. (Elan Zafir as Reg, a frat-boy type who turns out to be a bit deeper than it first seems — even if, among this crowd, puddle-deep is enough to count — also enlivens each of his scenes.)

But Rebeck’s attempt to shoehorn a modern take into Congreve’s dusty play is ultimately problematic. Is it true, as Henry and Mae’s Aunt Rene insist, that Mae doesn’t care about Haiti and that her altruism is a substitute for a rebound man? What does it say that she takes back this cad even as he continues to manipulate her? Why does Mae slur her just-past-50 aunt as a “slut” for daring to seek a sex life? Rebeck wants to say something about the mores of the upper class, and the independence of women, but it’s not clear what — and remains unclear with the unsatisfying ending.

Ah, but there’s the Waitress, unnamed, played by Morris. She’s our tour guide to this bizarre world of excess, Virgil narrating our course through a shiny Inferno. Her delightful monologues are Rebeck’s best writing in the play, and Morris makes the most of them, bounding across the stage with raw enthusiasm — contrasted in her scenes with the other characters, where she must hover, silent and subservient.

Cho’s blindingly ridiculous costumes also deserve attention — not that they would be possible to overlook. Cho wraps these preening peacocks in absurd bright, clashing outfits that they are oblivious enough, and smug enough, to be able to pull off. The way Rebeck’s characters dress ultimately says more about them than the things they actually say.

“The Way of the World” runs through February 11, 2018, at the Folger Theatre, 201 East Capitol Street SE in Washington. Click here for tickets.