1. “The Tempest” at Baltimore Shakespeare Factory.

“Through their creative and unique approach to storytelling, BSF manages to present “The Tempest” in a way that is fresh, entertaining, and accessible—whether you are a lifelong Shakespeare lover or a first-time theatre-goer.” – Johanna Alonso.

Synopsis: Shakespeare’s comedy about a major act of betrayal, ill-treatment, the development of magic arts and a plot of revenge. 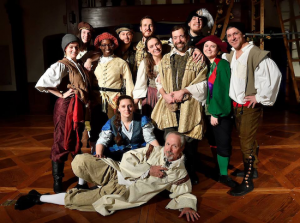 The cast of The Tempest. Photo provided by BSF.

“Everything about ‘Queens Girl in Africa’ is simply superb…” – Brittney Allen.

Synopsis: Jacqueline must navigate both personal challenges (fitting in at a new school, applying to college, falling in love) and societal challenges (a civil war in Nigeria and growing racial tension back in the States). Dozens of characters (and dialects!) are performed by Helen Hayes Award-winner Erika Rose (In Darfur, An Octaroon, Unexplored Interior), in this touching and hilarious coming-of-age comedy. Part of Mosaic’s new Locally Grown initiative. 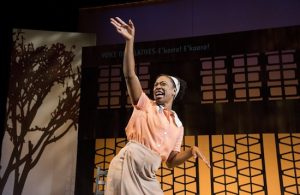 3. “The Humans” at The Kennedy Center.

“From beginning to end, this uplifting masterpiece entertains through its simple portrayal of human complexity.” – Erin Ridge.

Synopsis: Stephen Karam’s uproarious, hopeful, and heartbreaking play takes place over the course of a family dinner on Thanksgiving. As darkness falls and eerie things start to go bump in the night, the Blake clan’s deepest fears and greatest follies are laid bare. Our modern age of anxiety is keenly observed in this new American classic that won the 2016 Tony Award® for Best Play. 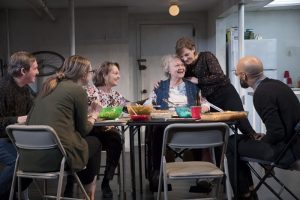 4. “Fiddler on the Roof” at Compass Rose Theater.

“…do yourself a favor and honor the tradition by seeing this fine revival at the Compass Rose Theater.” – Jeanie Casison.

Synopsis: Winner of nine Tony awards, this beautiful musical play tells the story of the village of Anatevka, a Jewish settlement in Czarist Russia. Though poor in possessions, the family of Tevye, a milkman, is rich in daughters and happiness. Traditional values face changing social mores and growing anti-Semitism as the daughters fall in love and marry. The love stories of the play are captivating, as each daughter makes a different choice. The poignancy of the story and the beauty of the music have made this play a tradition for musical theater audiences everywhere, but especially powerful on the intimate Compass Rose stage. 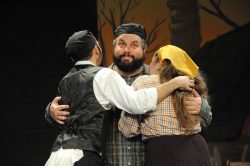 G. Michael Harris as Tevye (center) with Piers Portfolio as Motel and Stephanie Ichniowski as Tzeitel in Fiddler on the Roof at Compass Rose Theater.

5. “The Skin of Our Teeth” at Constellation Theatre.

“But this is an absurdist play with some serious underpinnings…” – Mary Ann Johnson.

Synopsis: The Eternal Family is made up of George and Maggie Antrobus (married only 5,000 years), their two children Gladys and Henry (perfect in every way), and the maid Sabina (the archetypal seductress). Featuring a woolly mammoth and a dinosaur as the family pets, an Atlantic City fortuneteller, and a bomb shelter brimming with books, this epic saga is hilarious and inspiring. 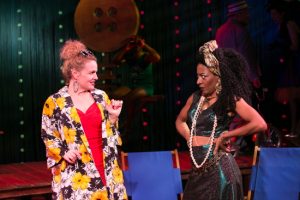 Tonya Beckman (Sabina) and Lilian Oben (Fortune Teller) in The Skin of Our Teeth. Photo by Daniel Schwartz.