“In the dark and cold of winter, the Vienna Theatre Company is offering audiences a rare opportunity to experience an evening of warmth and laughter provided by some of the area’s best local talent. Not to be missed!” – Jeannette Mulherin. 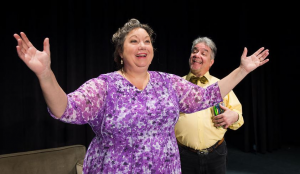 Sally Cusenza as Amanda and Dino Coppa as Lawrence in “Eclectic, Essential…Relationships” at the Vienna Theatre Company.  Photo by Lock & Company.

2. “Imogen” by Pointless Theatre at The Dance Loft on 14th.

“Why should the audience only witness vocalized Shakespearean text when we can relish that text embodied in stylized choreography and shadow imagery that is equally, if not more, poignant? That’s the stuff Pointless Theatre is made of, and it makes for brilliant theatre, as in this deliciously graphic show.” – Genean Hines Grobe.

Synopsis: Shakespeare’s Cymbeline re-imagined. Pointless explores what happens when Princess Imogen’s fairy tale narrative doesn’t go according to plan. Get ready for a mash-up of the Bards’ most classic plot twists – mis-identity, an estranged royal family, fantastical forests, and a wicked stepmother – told through stylized movement and shadow puppetry. 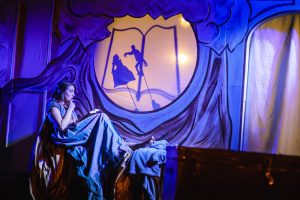 “…at one truly sublime moment, it was like watching an old Carol Burnett sketch with Tim Conway and Harvey Korman.” – Mary Ann Johnson.

Synopsis: t’s the 1960s, and swinging bachelor Bernard couldn’t be happier: a flat in Paris and three gorgeous stewardesses all engaged to him without knowing about each other. But Bernard’s perfect life gets bumpy when his friend Robert comes to stay and a new and speedier Boeing jet throws off all of his careful planning. Soon all three stewardesses are in town simultaneously, timid Robert is forgetting which lies to tell to whom, and catastrophe looms. A riotous farce! 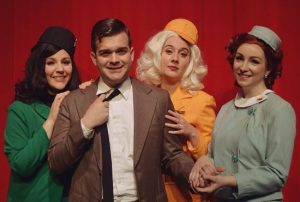 4. “Quartet” at Colonial Players of Annapolis.

“Overall, ‘Quartet’ has timeless messages about love, friendship, and the importance of coming to terms with your past in order to live fully in the present.” – Mark Beachy.

Synopsis: Cecily, Reggie and Wilfred reside in a home for retired opera singers in Kent, England. Each year, on the tenth of October, there is a concert to celebrate Verdi’s birthday. Jean, who used to be married to Reggie, arrives at the home and disrupts their equilibrium. She still acts like a diva and refuses to sing. But the show must go on in this funny and poignant play. 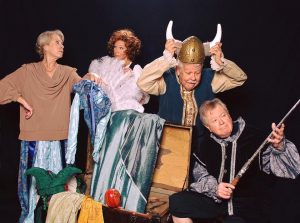 The cast of ‘Quartet.’ Photo courtesy of Colonial Players of Annapolis.

5. “Disney’s Beauty and the Beast” at Children’s Theatre of Annapolis.

“No matter how old you are, ‘Beauty and the Beast’ will touch your heart and fill it with happiness and hope…” – Jeanie Casison.

Synopsis: The classic story tells of Belle, a young woman in a provincial town, and the Beast, who is really a young prince trapped under the spell of an enchantress. If the Beast can learn to love and be loved, the curse will end and he will be transformed into his former self. But time is running out. If the Beast does not learn his lesson soon, he and his household will be doomed for all eternity. 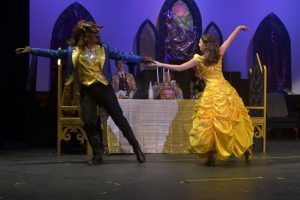 Jake Wernecke and Sarah Kalafos in “Disney’s Beauty and the Beast” at the Children’s Theatre of Annapolis.