1. “The Underpants” at Rockville Little Theatre.

“Fleming helms a cohesive and enjoyable production that makes you both think and laugh heartily.” – Kristin Franco.

Synopsis: A couple’s conservative life is changed by a flash of underwear—but not in the way they expect. Instead, it introduces them to two characters with amorous intentions. THE UNDERPANTS is a farce that entertains on many levels. 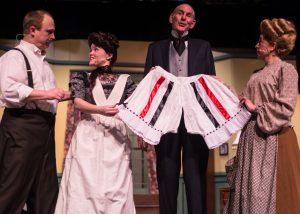 Synopsis: A comedy of manners that spans centuries, Cloud 9 is a smart, satirical look at gender politics and sexual oppression across the ages. Written in 1978, this modern classic offers witty social commentary, controversial casting requirements, and if that weren’t enough, time-travel! Taking us from the corsets of colonial Africa to the sexual liberation of 1970’s England, Churchill’s parody pokes fun at nearly every permutation of human sexuality, and reminds us why the playwright remains a feminist hero and icon today. 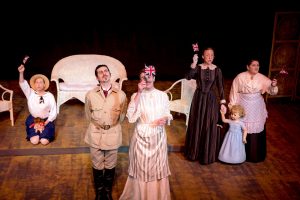 3. “Company” by The Fredericktowne Players.

Synopsis: Sondheim’s game-changing musical is a sophisticated and honest look at modern adult relationships. From musical theatre’s most renowned composer, Company is largely regarded as a trailblazer of the dark-comedy, modern-musical genre and the winner of seven Tony Awards, including Best Musical, Best Score, Best Lyrics and Best Book.
On the night of his 35th birthday, confirmed bachelor, Robert, contemplates his unmarried state. Over the course of a series of dinners, drinks and even a wedding, his friends – “those good and crazy people [his] married friends” – explain the pros and cons of taking on a spouse. The habitually single Robert is forced to question his adamant retention of bachelorhood during a hilarious array of interactions. Company features a brilliantly brisk and energetic score containing many of Stephen Sondheim’s best known songs. Every audience member will see reflections of themselves in at least one of the characters onstage.

“The strong ensemble of performers creates a genuine sense of unity, all while telling the story about a country that is divided.” – Mark Beachy.

Synopsis: Playwright Timberlake Wertenbaker explores the contradictions between our founding fathers’ ideals and the realities of freedom in America. Christian, a Quaker pacifist, defies his family to fight in the American Revolution. Susannah, an enslaved woman, is tempted to fight for the British when they promise her liberty. On their travels, Christian and Susannah cross paths with Thomas Jefferson, George Mason and Sally Hemings. These encounters force them to confront the compromises America makes after the promise of equality. Wertenbaker takes us from Revolutionary battlefields to Paris to Thomas Jefferson’s home, Monticello. Nataki Garrett (Woolly Mammoth’s “An Octoroon”) directs this American premiere. Part of the Women’s Voices Theater Festival. 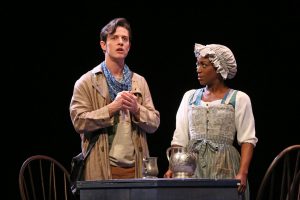 “Urie never stops moving – he has no sense of stillness, lending a desperate, frenetic – almost manic – authenticity to his performance.” – Morgan Halvorsen.

Synopsis: In the wake of his father’s abrupt death, Hamlet returns home from university to find his personal and political world changed as he never imagined it could—his mother remarried, his uncle on the throne and a world seemingly gone insane. When his father’s ghost appears and demands vengeance, the increasingly desperate Danish prince must decide: submit or resist. Accept or avenge. Live or die. Michael Urie (Buyer & Cellar, Ugly Betty) stars as Hamlet under the illustrious direction of Michael Kahn. Together, they’ll give life to the greatest character of Western literature as he confronts the line between madness and inspiration. 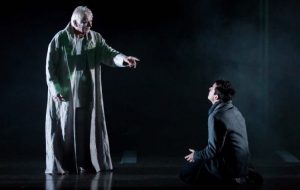 Hamlet (Urie) is visited by the ghost of his father (Baxter). Photo by Scott Suchman, courtesy of the Shakespeare Theatre Company.