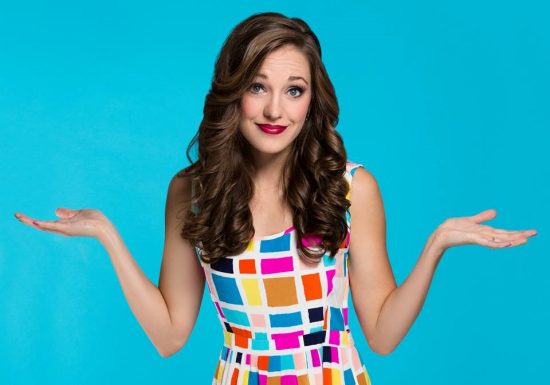 “A lovely night, a finer night you know you’ll never see.” These lyrics sung by Rodgers and Hammerstein’s Cinderella can certainly be applied to a recent evening with one of the most recent Broadway Cinderellas, Laura Osnes, as she took the stage at AMP Strathmore this past Wednesday. Osnes was the choice for the inaugural performance of what is planned to become a season-long partnership between Michael Feinstein and the cabaret venue to bring the best of Broadway to North Bethesda. And what a perfect choice she was. Osnes’ undeniable talent, effervescent stage presence, and bubbly personality was a magnetic and auspicious start to the Feinstein Presents series.

Osnes’ undeniable talent, effervescent stage presence, and bubbly personality was a magnetic and auspicious start to the Feinstein Presents series.

For those not familiar with Laura Osnes, she is an extremely accomplished singer and actress with numerous Broadway credits. Her pure-toned soprano and sweet disposition helped her to win the iconic role of Sandy in the Broadway revival of “Grease,” by winning the NBC reality show “You’re the One That I Want.” She followed that with starring roles in the Broadway revivals of “South Pacific” and “Anything Goes,” as well as a Tony-nominated performance as Bonnie in the premiere of “Bonnie and Clyde the Musical.” However, her biggest role would come with her turn as the eponymous princess in the Broadway production of Rodgers and Hammerstein’s “Cinderella.” Her starring role, alongside Santino Fontana as Prince Topher, garnered her 2nd Tony award nomination and the admiration of a wide range of audiences. She followed this up with leads in two more Rodgers and Hammerstein musicals, playing Maria in “The Sound of Music” in New York and Julie in “Carousel” in Chicago. Most recently, she was seen in the Broadway premiere of the original musical “Bandstand,” alongside Corey Cott. She was nominated for a Drama Desk award for this role.

Amidst the buzz of excited voices and clinking glasses, Osnes took the stage with just the simple accompaniment of her friend and musical director Benjamin Rauhala on the piano. One of her opening numbers was a charming version of “I Have Confidence,” from “The Sound of Music,” that she adapted to suit that evening’s performance. It would not be the last of the Rodgers and Hammerstein tunes, as Osnes honored her connection to the famous composers. She also performed a buoyant version of “I’m in Love With a Wonderful Guy,” from her time as Nellie Forbush and a haunting rendition of “If I Loved You,” from “Carousel.” Both highlighted Osnes’ ability to seamlessly switch from chest to head voice effortlessly, and her talent of being able to change her style and affectation based on the character she was portraying in the song. She also sang the heartfelt “Love Will Come and Find Me Again,” from “Bandstand,” “Bonnie’s Anthem” from her turn in “Bonnie and Clyde,” as well as “Someone to Watch Over Me,” from her upcoming production of “Crazy for You.”

Osnes also performed several favorites of hers, much to the audience’s delight. Some highlights were a jazzy version of “Green Finch and Linnet Bird” from “Sweeney Todd,” “I Could Have Danced All Night,” from “My Fair Lady,” “Popular” from “Wicked,” complete with magic wand, and a particular favorite of this reviewer, “Not for the Life of Me” from “Thoroughly Modern Millie.” A rendition of “When She Loved Me” from “Toy Story 2” that Osnes dedicated to her mother, who she lost to cancer 8 years ago, moved this reviewer to tears with its beauty and feeling. She was also able to highlight a series of “princess shows” that she and Rauhala have created and performed at NYC’s 54 Below venue by doing the “Midnight Princess Mega Medley.” This mash-up contained nearly 15 princesses related songs, which seemed fitting since Osnes met her now husband in the musical “Aladdin;” an incredibly comical story that she shared with the audience.

Osnes wasn’t content with just singing, though. She professed that she also loved games, and called out quotes from some musical theater favorites of hers from her “theater nerd” high school years. The prize? A Reese’s Peanut Butter Cup tossed by Osnes herself. That wasn’t the only fun and unexpected moment of the evening, though. Unbeknownst to the audience, and, seemingly, Osnes herself, her “Bandstand” cast-mate, Corey Cott was in the audience! Cott is currently in the DMV rehearsing for a concert version of “West Side Story” that will be performed at the Kennedy Center with the National Symphony Orchestra as a part of the Bernstein at 100 celebration from February 14-17th. Delighted, Osnes pulled him onstage for an impromptu rendition of “Love is an Open Doory,” from the Disney film “Frozen.” Cott was also joined by another “West Side Story” performer, Krysta Rodriguez, who is playing Anita.

It was a fantastic evening for lovers of Broadway, capped off with an encore performance of “In My Own Little Corner” from her star-making turn as Cinderella. Osnes had a VIP reception with select ticket holders, but also made herself available to all audience members for pictures and autographs, which was incredibly gracious. While the next show and performer in Feinstein’s series has not yet been announced, this reviewer waits with bated breath for another show this enjoyable to come our way.

While “Feinstein Presents Laura Osnes” was a one-night engagement, there are a number of exciting upcoming events at AMP Strathmore; more information can be found here.

If you want to check out the upcoming “West Side Story” concert with the NSO, more information can be found here.