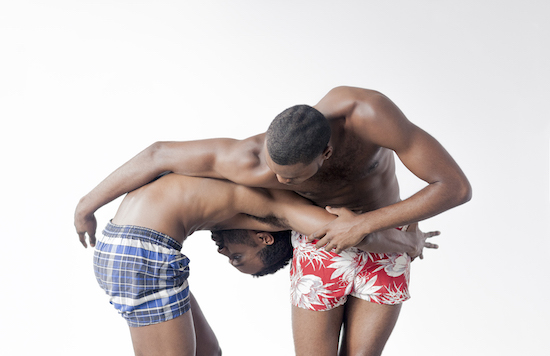 In the program notes, choreographer Kyle Abraham revealed the driving force of “Dearest Home.” In the year leading up to the premiere, his mother died and he ended a relationship with the man he thought he would marry. The losses grieved him. From this emptiness, he created “Dearest Home,” a modern dance meditation on love and belonging. Presented by the Clarice Smith Performing Arts Center’s Visiting Artist Series, “Dearest Home” was performed by Kyle Abraham/Abraham.In.Motion, featuring Matthew Baker, Kayla Farrish, Tamisha Guy, Catherine Ellis Kirk, Marcella Lewis, and Jeremy “Jae” Neal.

Upon entering the theater, each audience member received a headset with instructions to watch the performance either with accompanying music in our ears or in silence. I chose music, though I’m not sure this mattered. White noise muffled the music, which added little more than pace and punctuation. The impressive thing was not actually the technology but the performers, who danced solely to counts and memory of the music.

Our choices made, the lights darkened in the theater, a large square room with a dance floor in the center and the audience seated in risers around the perimeter. A dancer in a tropical print shirt walked out of the shadows. He paused and tucked his shirt in. Then he walked off stage.

Two more dancers came from the shadows, a woman in a pink floral dress and a man in another hibiscus-print shirt. They danced, sometimes as partners, sometimes as mirrors, sometimes unaware of each other. They stayed low to the ground as if tethered and swung their arms around like children playing airplane. Every minute or so they returned to the center for a long embrace before taking off again. Then they walked back into the shadows.

“Dearest Home” unfolded this way, mostly as a series of duets. Pairs of people—a woman and a man, two women together—would emerge, dance, and recede. They would dance together then move apart, together than apart, sometimes tender and sometimes tense. Always they returned to the center and embraced.

As the duets continued, the dancers undressed each other. They danced in their underwear, their movements more tense, yet more tender. One could see this as a metaphor: as we grow in intimacy with another, we remove our layers of armor and pretense to expose more of ourselves. I took it literally. We only dance in our underwear with people we love, know and trust.

But one man (Matthew Baker) danced alone. He quietly unbuttoned his shirt and pulled off his own pants, folding them neatly. But his dance was chaotic and pained. He twisted and thrashed. Then suddenly he stopped in the middle of the floor and sobbed. We could see grief rippling through his body—in his quivering hands, heaving chest, and the knobs of his backbone pressing through his skin—and somehow in the magical transference of authentic dance, his grief became mine. I ached for him, and I ached for me. And for a moment, we were no longer alone.

Baker’s solo was, I believe, the choreographer’s self-portrait. What I took him to mean: only in laying ourselves bare to our pain and to each other will we ever find the antidote to loneliness—belonging, love, and a sense of home in each other.

“Dearest Home” was performed February 23 and 24, 2018 in the Kogod Theatre at the Clarice Smith Performing Arts Center, as part of the Visiting Artist Series in College Park, MD. Learn more about the performance online.