Dance Review: ‘Romeo and Juliet’ at The Washington Ballet 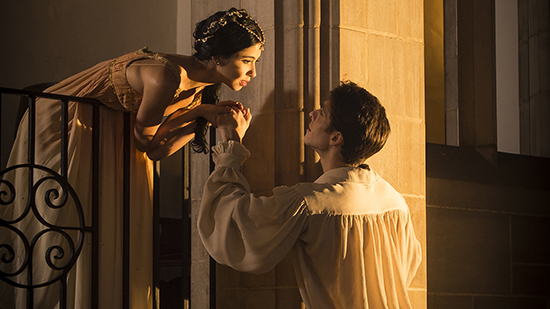 Venus Villa and Corey Landolt in ‘Romeo and Juliet.’ Photo by media4artists.

Despite its being a “tale of woe,” The Washington Ballet’s new production of John Cranko’s “Romeo and Juliet” is quite a delightful affair. The show’s exquisite dancing and real emotion deliver on the romantic promise of Shakespeare’s tragedy.

John Cranko’s ballet, originally staged in 1962, is based on William Shakespeare’s play about the star-crossed lovers. This staging locates the story in its original 16th-century Italian setting, and includes the same plot and characters: in fair Verona, the powerful and dynastic Montague and Capulet families vie for power. Amidst their occasionally violent clashes, Romeo, the heir to the Montague house, and Juliet, the daughter of Lord Capulet, fall in love, a turn of events that has tragic consequences for both themselves and their families.

One of the show’s many strengths is its leads. Corey Landolt as Romeo and Venus Villa as Juliet are sensitive and eminently believable as the young couple, combining technical mastery with real emotion. Villa expertly communicates, through characterization and movement, Juliet’s journey from a tentative ingénue to a young woman, confident and in love. She is partnered very well by Landolt’s expressive performance as Romeo, showing the young hero as passionate but pacific. He’s a lover, not a fighter (for the most part).

The show’s exquisite dancing and real emotion deliver on the romantic promise of Shakespeare’s tragedy.

Cranko’s choreography, staged by Jane Bourne, leans into the energy and comedy of Shakespeare’s original text. The dynamism of the show is kept high by the diversity of dancing; from the leads’ intimate duets to ensemble line dancing and even some very fine comic tumbling. The tension between Jonathan Jordan’s mischievous Mercutio and Brooklyn Mack’s fierce Tybalt leads to a highly compelling, and pivotal, fight scene.

As the source material warns, though, “these violent delights have violent ends,” and so this lively production eventually makes its way to a somber, and soulful, finish. Nevertheless, the show, which opened at The Kennedy Center on Valentine’s Day, leaves the impression of a highly entertaining and superlatively-danced love story.

‘Romeo and Juliet’ is playing through Sunday, Feb. 18. For tickets or more information, click here.