Dance Review: ‘Stepping Out’ at George Mason University Center for the Arts 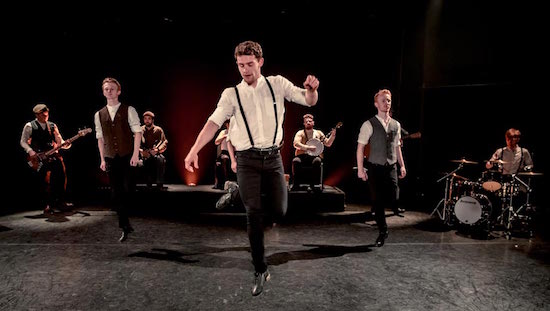 The cast of Dublin Irish Dance. Photo provided by the George Mason University Center for the Arts.

Most striking about Irish dance is the near total absence of port de bras—the movement of arms. The torso remains rigid, with the arms stick straight at the sides or at right angles against the hip, while the dancer bobs up and down like a brightly colored fishing tackle. By contrast, the legs kick, jig, and rhythmically flail.

Not unlike the Irish themselves, Irish dancing is a study of contrasts: stillness and motion, jubilation and lament, a ballad and a jig. The theme is threaded through “Stepping Out,” performed by Dublin Irish Dance at the George Mason University Center for the Arts on Saturday, January 27.

“Stepping Out” tells the story of Irish emigration at the turn of the 20th century through the fictional tale of a young, unmarried couple, Aidan and Ciara. Like many young Irish people at the time—indeed, like young people of any time—Ciara is torn between her dream of a better life in the States and her love for her homeland, as embodied by her boyfriend and the three other couples who jig around them.

Like chapters in a book, the narrative unfolds in twenty-one sequential musical numbers played by an eight-piece band—men in vests and flat caps who seamlessly mix the slick modern sound of the electric bass and keyboard with the rusticity of an accordion and uilleann pipes. Most of the numbers feature the company of eight dancers, two of whom represent Ciara and Aidan; a handful, though, are vocal solos or duets; all move the story forward.

In the first act, Ciara and Aidan profess their love and loyalty (“Lovers Dance”), Ciara decides to make the passage to America (“’Heartland”), and Aidan decides to let her go (“Set You Free”). Ciara, already heartsick, hardly dances in the last song before intermission; instead, she shares many long hugs with her lover. She wears a buttoned-up coat and carries a big brown suitcase.

…the vulnerable heart of Ireland, a nation known simultaneously for camaraderie and terror, for famine and rolling green hills, came through.

When the second act begins, she has arrived in the States, taken off her coat, and found a new, American love interest named Sean. She enjoys his attention—but only until Aidan shows up with a big brown suitcase of his own, and the two men face off. They scowl and leap and stomp their heels against the stage, fury contained in 8 counts, in a dance-off for Ciara’s affection.

The only inconsistency in the narrative is Ciara herself. The first act portrays her as fully committed to Aidan. She professes, “There’ll be no sweet little babes while you’re away from me” in a number called “If I Prove False to Thee.” But not three songs later, the audience watches as she flirts with another man. Regardless, her character is danced with feeling; she shifts from lively to legato with ease. This versatility makes up for any lack of clarity.

The dancing was both precise and exuberant, the band modern and homespun at once. The finale was grand and Irish. The number that felt most true to Ireland, though, arrived at the very center of the story when the gaiety faded and the guitarist with the voice of a radio angel stepped into center stage. As he sang an acoustic version of the beloved Irish folk song “The Parting Glass,” the vulnerable heart of Ireland, a nation known simultaneously for camaraderie and terror, for famine and rolling green hills, came through:

Fill to me the parting glass

And drink to health whate’er befalls

And gently rise and softly call

Good night and joy be with you all.

The song, and “Stepping Out” as a whole, carries the twin threads of Ireland’s fabric. One is darker, the stories of longing and loss. But the other is of light, of blessing and friendship and the unsinkable Irish spirit.