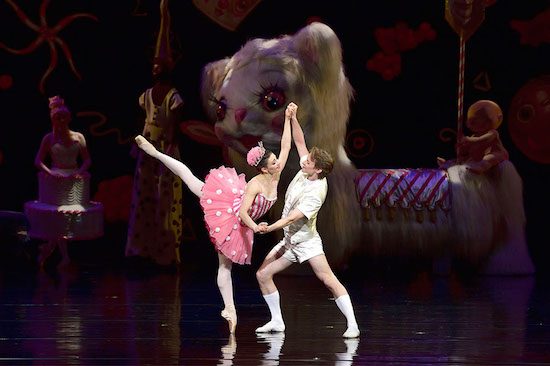 Princess Praline and the Boy in Act II of American Ballet Theatre’s Whipped Cream. Photo provided by the Kennedy Center.

Classical story ballets tend to be about sinister things. A cursed spindle (“The Sleeping Beauty”), a spellbound swan (“Swan Lake”), a haunted prince (“Giselle”). Even “The Nutcracker” has dark undertones—a broken doll, an evil mouse king, an irritating little brother.

How refreshing, then, is Alexei Ratmansky’s “Whipped Cream,” a ballet about a boy with a runaway sweet tooth, whose greatest enemy is a grim hospital doctor? Performed by the American Ballet Theatre at the Kennedy Center Opera House, “Whipped Cream” invites the audience into the daydreams of a sugar-crazed child and his imaginative choreographer.

The story is disarmingly simple. A group of schoolgirls in ruffled white dresses and boys in sailor shorts celebrate their first communion with a visit to a sweet shop. While the children swirl around the pastry chef and his candy counter, one Boy (Daniil Simkin) sneaks off with a big silver bowl of whipped cream. He eats too much, becomes sick, and is carried away on a stretcher to the hospital with the other children in tow. For a beat, the stage is still—then the sweet shop comes to life.

“Whipped Cream” invites the audience into the daydreams of a sugar-crazed child and his imaginative choreographer.

From the cabinets and cookie tins march any army made of sweets: gingerbread and marzipan and sugarplum men with licorice stick swords and chocolate cup shields. Prince Coffee (David Hallberg) and his guard join the raucous mix, just before Princess Tea Flower (Stella Abrera) and her flowerettes emerge from a tea tin. Abrera brings a lightness to the part, in equal parts playful and precise. Most endearingly, she makes us laugh with the little moments of pantomime folded into her pas de deux with Hallberg’s Prince Coffee. She puts her hands on her hips, disapprovingly; he dives on the floor at her feet. He leans in for a quick kiss; she gives him a swift kick. When so much of ballet is heavy and serious, their levity is refreshing.

By the second act, the Boy has arrived at the hospital, held captive by a bevy of nurses with three-foot-long syringes and a doctor with a gargantuan rubber head. But soon Princess Praline (Sarah Lane) and her magical procession arrive to break him out. As the Princess, Lane is regal and girlish at once. In one moment, she is sophisticated royalty; in the next, a gushing adolescent with a crush on the Boy. And somehow Simkin is both the shy, awkward Boy making silly wave motions with his arms and the masterful dancer doing grand jetés in a circle around the stage.

This is the magic of “Whipped Cream,” the bringing together of disparate things. Not exactly opposites, but not things one might naturally pair, like a classical ballerina in a candy swirl costume or a full-length ballet with a silly story. Ratmansky himself blends Petipan attention to form with a sense of play. With “Whipped Cream” he reminds us that beautiful ballet can also be fun.

Running Time: Approximately 1 hour and 17 minutes, with one intermission.