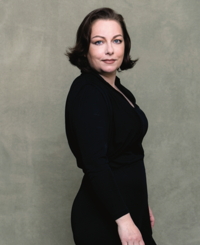 Vocal Arts DC’s Feb. 8 concert was a Liederabend, a series of German art songs, largely from the Romantic era. Thematically, the series told the stories of four women—Mignon, the waif created by Goethe and brought to life in music by Schubert; Alma, the wife of Gustav Mahler; Mary, Queen of Scots, in a series of songs composed by Robert Schumann, and Mathilde Wesendonck, the object of Richard Wagner’s affections. It helps that this German music, created by well-known German composers, was sung by a strong woman herself: Dorothea Roschmann, a soprano and the voice of this recital.

According to the program, Roschmann has been performing for over 20 years, and it shows. She has exceptional control of her volume, varying between a light whisper and powerful vocals with ease. She enunciates carefully, sounding each consonant with her whole face, and is capable of trilling like a bird with her vibrato. She puts great feeling into her voice, especially in the tragic songs of Schumann’s Mary, Queen of Scots cycle.

…it was a privilege to watch someone with that much skill perform so well.

“Gebet,” based on a poem originally written in Latin by the Scottish queen, was especially moving. In the song, the queen implores Jesus to save her, saying (according to the English translation), “In a cruel prison, in sore distress, I yearned for Thee, in lamentations sobbing to Thee.” One could almost see Mary Stuart, trapped in her cell, begging for release.

But Roschmann also displayed a sense of joy, expressing raw delight over beauty in “Kennst du das Land,” a narrative that describes in detail the lovely trappings of a house and its surrounding countryside, caressing the words that said (in German), “Do you know the land where citrons bloom, golden oranges glow among dark leaves, a gentle wind blows from the blue sky, the myrtle is still, and the laurel stands tall?” It was as if the singer herself were reminiscing.

This vocal concert seemed less intimate than other performances, perhaps because of the sense of scale—Wagner, for instance, certainly had a flair for the dramatic, and considered the songs included in this concert as a prelude to his Tristan und Isolde. Roschmann’s performance was quite powerful and dramatic, and technically brilliant—she has remarkable control over her voice, its volume, tone and cadence. But lost, I think, despite Roschmann’s impeccable vocals, was the sense of closeness and intimacy that characterized the traditional Liederabend and certainly previous Vocal Arts DC concerts. The performance felt more like watching opera than watching a recital. That being said, it was a privilege to watch someone with that much skill perform so well.

Pianist Malcolm Martineau played his role as accompaniment with aplomb, handling some complicated melodies with ease. He seemed to be paying close attention to Roschmann’s cues, and his work with the sustain pedal meant some songs ended several seconds after Roschmann was done singing.