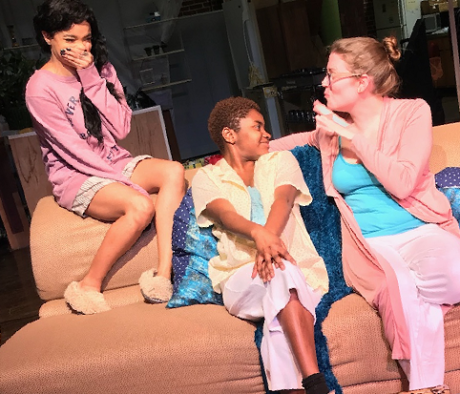 “The first man that’s supposed to love you is your dad.” Issues with family, race, and class abound in Lydia R. Diamond’s “Stick Fly,” presented through a partnership with ANKH Repertory Theatre and The Finest! Performance Foundation, Inc.

“Stick Fly” unfolds over a weekend at the swanky Martha’s Vineyard vacation house owned by the affluent, African-American LeVay family. Kent (Mack Leamon) is bringing his fiance Taylor (Linae “Sunny” Bullock) to meet his family for the first time. She is nervous, because, though her father was a famous academic, he abandoned her and her mother and she grew up in relative poverty. She is bewildered and intimidated by the opulence of her current surroundings. Things are compounded by his older brother Flip (Kelly Chauncey), also deciding to invite a lady friend named Kimber (Allison Bloechl) who is, ahem, a bit “melanin challenged.”

This production was both nuanced and thoughtful, balancing comic and dramatic moments effectively.

The brothers are surprised to find the woman who has been their housekeeper for over 2 decades is absent, because of illness, and her 18-year-old daughter Cheryl is filling in (Breana Grace Thomas). Cheryl is in an awkward place because of this; she has grown up with Flip and Kent, but now finds herself in a position of subservience. The final piece of the puzzle is the patriarch of the LeVay family, Joseph (Tyrell “Silas” Martin.) His harsh and disapproving presence is a menacing figure cast over the rest of the group, with the additional mystery of the conspicuous absence of their mother casting even more tension into the mix. By the end of the weekend, dark secrets are revealed with the dynamics of this group of people changed forever.

“Stick Fly” was originally produced by Alicia Keys, which this production honored by playing her music in the house both before the performance began and during intermission. The Broadway cast boasted huge names such as Dule Hill (The West Wing, Psych), Mekhi Phifer, (ER, 8 Mile), and Tracie Thoms (Rent, The Devil Wears Prada.) It ran for 93 performances from 2011-2012.

This play is all consumed with the inter-personal relationships between the characters, and just how fraught they are. Taylor feels threatened, particularly by Kimber, because this white woman seemingly fits in with the wealthy LeVay family better than she does, which angers and bewilders her. The relationship between father and sons is also tenuous, as the father radiates disappointment on Kent, and Flip increasingly feels animosity toward his father for making him as faithless with women as he is. Cheryl also clashes with Taylor, who makes her feel subservient to a family with whom she had always felt a full part of, on top of having to deal with her mother’s illness. Finally, Taylor also struggles with the difficult relationship she shared with her recently deceased father, with the feelings being thrust back into the forefront of her mind due to Joseph’s similar occupation and the contentious relationship that he shares with his own children. Dysfunctional fatherly relationships run deep in this play, as do questions of race and class dynamics.

This production was both nuanced and thoughtful, balancing comic and dramatic moments effectively. As I detailed, the relationships in this show are a labyrinth and can easily become unruly. This talented cast managed these intricate twists and turns with confidence. Leamon brought a sensitivity and vulnerability to Kent, giving the audience someone to root for in a cast of characters who could be greatly unlikeable at times. Bullock plays Taylor with a balance of goofy charm, sharp intelligence, and wounded sadness. The common housefly and how it is studied by scientists like her were the way the play got its name. Chauncey does double duty as both playing Flip and co-director. His portrayal of Flip is affecting, as he guides the character through a great deal of growth and development over a few short days. Thomas is able to portray both sharp comedic timing and dramatic depth and Bloechl provides some much needed comic relief in moments and empathy in others. Finally, Martin delivers an excellent performance of a very complicated, and in many ways unlikeable, man, with pathos.

The set is also impressive; the fact that the entire play is set in the same place allows the set to be incredibly detailed and rich, as things don’t have to change quickly. The set offered multiple tableaus within the same set, providing the opportunities to show dual sets of character interactions simultaneously (Set design by Lena Chaudrey.) The show overall was very impressive, especially since two actors joined the cast with just three weeks of rehearsal left, and the director himself had to step into an acting role with just a week to go. Kelly Chauncy and Kashi-Tara should be commended on helming a thought-provoking production that remains topical within today’s society and culture. ANKH Repertory Theatre and The Finest! Performance Foundation should also be recognized for bringing diverse shows with hard-hitting and entertaining themes to the Gaithersburg community.

Running Time: Approximately 2 hours and 15 minutes with one 15 minute intermission.

Advisory: Due to adult language and some adult situations, this show is recommended for audiences 16 and older.

While “Stick Fly” has now closed, you can find more information about upcoming shows from ANKH and the Finest! here.

You can also find more information about upcoming events at the Gaithersburg Arts Barn here.