Theatre Review: ‘A Public Reading of an Unproduced Screenplay About the Death of Walt Disney’ at Single Carrot Theatre 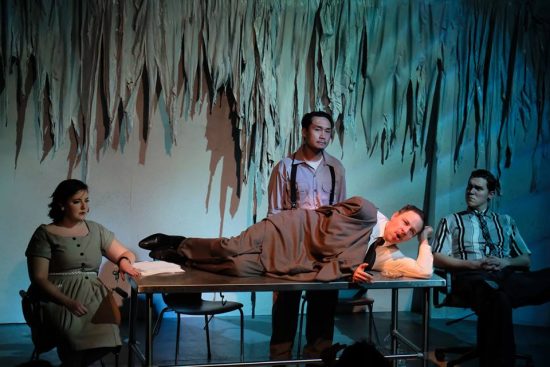 The cast of ‘The Death of Walt Disney.” Photo by Britt Olsen-Ecker.

Just minutes into “The Death of Walt Disney”  by Lucas Hnath, I questioned if this was the brilliant big-hearted man who brought us Mickey Mouse, Disney World, and a plethora of lovable cartoon characters that shaped many childhoods. It was. Walt Disney was a brilliant man, and with that brilliance comes obsession, self-promotion, selfishness, and even corruption.

The foyer at Single Carrot Theatre adorned with quotes about this great and clever man should have alluded me to the fact that he was a control freak and a megalomaniac as he is portrayed in this darkly humorous play, directed by Genevieve De Mahy and Matthew Shea.

It seems this play, which is a representation of Walt’s life and career, he is literally calling the shots. He constantly yells out “Cut to” to set up the scene for the next part of the play, as he is spitting up blood and hiding the fact from his family and workers that he is dying from cancer.

Walt Disney is played by Paul Diem, a seasoned performer who is well cast in this role, capturing this clever, yet controlling man brilliantly. Diem stays perfectly in character from the moment he escorts the audience to their seats to his final demise. He controls everything, looked on by his family who is also part of his workforce, or maybe his workforce who just happen to be related to him as at times it feels like there is very little love lost between them.

Mohammad R. Suaidi plays Roy Disney, Walt’s brother and long time suffering executive for Disney. Portraying clearly a smart yet somewhat overlooked character, Suaidi is the polar opposite to his brother, showing compassion to his children and begging Walt for a lighter work schedule so his wife will actually like him again. Suaidi balances both a love and a hate for Walt and does it exceptionally well.

The backdrop of the theatre appears to be icicles which tie in with Walt’s obsession with cryogenics. It is hardly surprising that this man would want to live forever. The set, designed by Hayden Muller, Cydney Cohn, Sierra Ho, Allison Bloechl, and Kristin Hessenauer, includes a simple stainless steel table with four chairs for Walt, Roy, Walt’s daughter Meghan and her husband Ron Miller, a retired football star who yearns to impress Walt and doesn’t realize that he is being manipulated.

For a good portion of the play, Walt, of course, takes the lead with his daughter, played by Meghan Stanton, and his son in law Ron Miller, played by Eric Poch, who sit in complete silence through several scenes. He controls the mood, the music and hates to lose control as death comes ever closer. Despite being silent, Stanton has an exceptionally expressive face as she reacts to her father’s rants, ideas, and idiosyncrasies. When allowed to speak, her dislike for her father is apparent, especially when it comes to the sensitive subject of not wanting to name her son after her father.

Poch plays well the son in law longing for Walt’s attention and trust while still balancing the emotions of his wife. Playing a former American football player, Pouch wants the Disney life and he drops his guard when Walt puts him in a position of trust in the company really just to serve as a mini Walt.

Walt was honored more than 950 times in his life, including not just one but two stars on the Hollywood Walk of Fame, 59 Academy Award nominations and 22 wins.

“Of all the people I have known in my life Walt is the only true genius.” -Ken Anderson, Imagineer.

“The Death of Walt Disney” runs through February 25th at Single Carrot Theatre for ticket information call 443-844-9253 or click here.