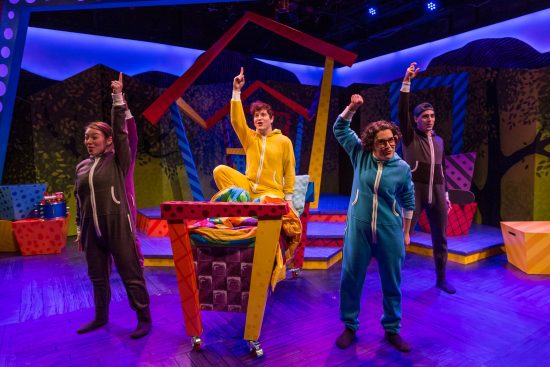 The cast of “Alexander and the Terrible, Horrible, No-Good, Very-Bad Day.” Photo by Michael Horan.

Did you ever just have one of those days? Alexander certainly has- a terrible, horrible, no-good, very-bad day, to be precise. The audience gets to experience that day with him in Adventure Theatre’s fun and funny production of “Alexander and the Terrible, Horrible, No-Good, Very-Bad Day,” based on the beloved children’s book by Judith Viorst.

For those unfamiliar with the story, Alexander (Christian Montgomery) is a little boy whose day starts off badly and just gets worse from there. Some of the things that he experiences are: his brothers (Sylvern Groomes Jr. and Sophie Schulman) both find prizes in their cereal boxes, but he doesn’t, his teacher (Sally Horton) doesn’t appreciate his creativity with his “invisible castle” drawing, and the man at the shoe store (Daniel Westbrook) only has boring, plain, white shoes instead of the cool ones with stripes that he wants. His friends also treat him poorly (Linda Baird and Tiziano D’Affuso), which really upsets him. These and many other things convince Alexander that this is the worst day ever. He doesn’t know what to do- maybe he’ll just move to Australia.

…a fantastic show for the whole family.

Adventure Theatre’s production takes this classic story and brings it to life, with some toe-tapping musical numbers thrown in for good measure. While Montgomery plays Alexander throughout, all of the other actors play multiple parts, keeping things interesting. The stage is bright and full of colors and patterns, with lots of movable pieces that change up the scenes throughout the show. One highlight of the show occurs during the song that Alexander sings about moving to Australia to escape his problems. The other cast members all operate amazing large puppets of animals found in Australia- they are also very colorful and the actors fill the stage with them.

Adventure Theatre is an extremely family-friendly venue, with stadium-style seating so everyone can sit together comfortably. Also, the staff is very friendly and helpful directing the mostly child audience in where to go and how to best enjoy the show. This show is the 3rd production of their 66th season, and they have lots of fun things planned- for example, at the showing of “Alexander…” that I attended, everyone was encouraged to wear their pajamas and milk and cookies were served after the show.

“Alexander and the Terrible, Horrible, No-Good, Very-Bad Day,” is a fantastic show for the whole family. While the subject matter is definitely directed at kids, I also really enjoyed the performance myself. Montgomery did a impressive job as Alexander, with an incredible voice and almost impossible energy throughout. The rest of the cast was also really fun and expressive, doing a great job of engaging the audience. The show I attended was packed full of children, some very young, and they were very rambunctious before the show began. However, as soon as the production began, everyone was transfixed- all went quiet and still as the action unfolded. This might be the highest praise this reviewer can convey; to be so engaging that it kept a room full of excited kids invested, is pretty amazing. This show is also a great story for young people- teaching them that sometimes you will have days where everything seems to go wrong, but you can make it through and hopefully tomorrow will be better.

If you have kids and are looking for a fun and educational way to entertain them, I highly recommend checking out Adventure Theatre’s “Alexander and the Terrible, Horrible, No-Good, Very-Bad Day.” They’ll love it, and you’ll enjoy it too.