Theatre Review: ‘Amazing Grace’ at the College of Southern Maryland 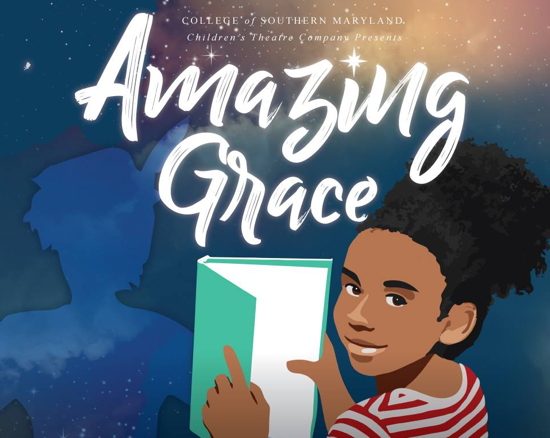 Join CSM’s Children’s Theatre on February 16 or 17 for their production of Amazing Grace.

The best way to critique a children’s show is to ‘come as a child.’ As I entered the theatre, nearly the entire center portion of the seats was filled with kindergartners and pre-schoolers from area elementary schools. I chose to attend this show during the school performance because I really wanted to witness how the show came across to an auditorium filled with the show’s ideal audience: children! The buzz in the theatre was overwhelming as the 200 children/parents/teachers chattered with excitement and anticipation. Just over the chatter, I could make out the sound of African tribal music, a backdrop to the production’s African roots. As the lights dimmed and the children grew still, I settled back in my seat and prepared for the adventure I knew was about to begin.

“…it is just plain good fun. I really felt as though I had stepped into the imagination of a child…”

“Amazing Grace,” by Shay Youngblood, is being performed by The College of Southern Maryland’s Performing Arts Company (CSM) February 16-17. This delightful children’s show captures the story of a young, African-American girl named Grace, and speaks of her death-defying adventures as the stories her Nan tells her come to life before her eyes. Grace (played delightfully by Alyssa Berry) captures the audience’s heart as she shares her adventures with us, from becoming Joan of Arc when facing a grumpy grocer to disguising herself and her friends as a ‘Trojan donkey’ to fool the boys during a game of hide-n-seek. Through it all, she learns many lessons that ring true no matter what your age.

The set was minimalistic, but performed its role perfectly, suggesting the bare bones of a home and yard that Grace, and her friends, transformed into anything they could imagine. The cast was delightful. Nan (portrayed effortlessly by Shemika Berry) is the grandmother we all want; who will tell us stories, engage in our imagination games, and teach us the most important lessons in life. Berry’s portrayal of her simply jumped off the stage and echoed through the theatre as she told stories of Anansi and searched for streets of gold with her granddaughter.

CSM’s production of “Amazing Grace” was directed by Sherry Santana, and it is just plain good fun. I really felt as though I had stepped into the imagination of a child, and was brought back to the innocence of ‘you can do anything you set your mind to if you believe that you can.’ Perhaps it is not so much innocent as it is just the truth. Many adults, myself included, often forget that we must believe in ourselves in order to achieve that which we dream of. For a child, the spatula in his/her hand becomes a sword simply by believing it can. We all say that things don’t work that way in the real world, but what if we’re the ones missing the point? Maybe we need to listen to our hearts, take the stories of our childhood, and allow the lessons we learned to echo through. If we believe, then we can do anything. We can “save the world from grumpy faces.” We can find out the other ways to skin a cat. This show reminds us of the power we each hold inside of us, and speaks to just how ‘amazing’ we all are!

Advisory: This show is perfect for children of all ages!

“Amazing Grace” will be playing at the College of Southern Maryland in La Plata, MD February 16th-17th . For more show information and tickets, please see here.