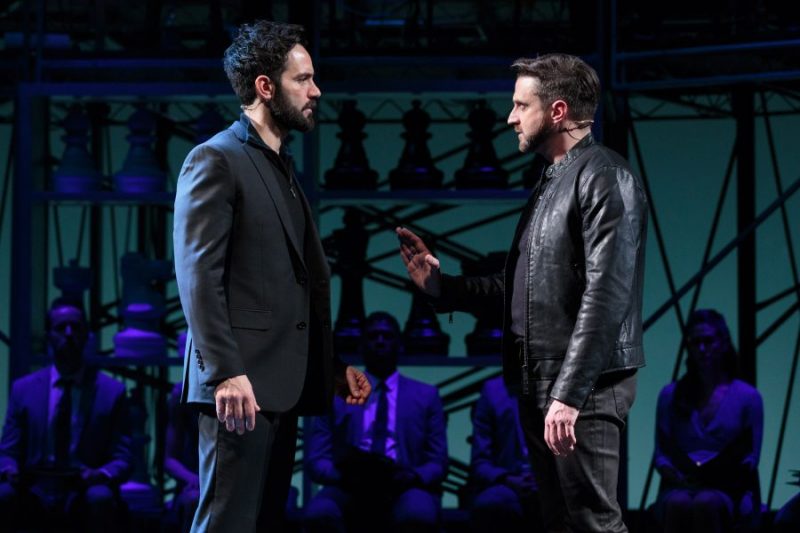 Ramin Karimloo and Raúl Esparza in “Chess” at The Kennedy Center. Photo by Teresa Wood.

As tension erupts between the United States and the Soviet Union in the days of the Cold War, a world of cunning deception is quietly unfolding in another arena—this time with a different set of pawns. Here lies the premise of “Chess,” the seductive rock opera on stage in the Eisenhower Theater at The John F. Kennedy Center for the Performing Arts.

Although ‘Chess’ is a limited engagement, it does set quite a high bar for the rest of the Broadway Center Stage series.

Launching Broadway Center Stage, a new series of musicals presented as semi-staged concerts, “Chess” offers all the juicy intrigue of the 1984 original, and is rather relevant given the current international political climate. Written by Benny Andersson and Björn Ulvaeus of ABBA with lyrics by Tim Rice and a new book by Emmy and Golden Globe Winner Danny Strong (“Empire” and “The Butler”), this compelling show provides plenty of suspense along with a sizzling love triangle. Framing the production is a steely backdrop with black and white chess pieces, cool grays, and the orchestra and projections of Ronald Reagan and the like playing above.

The exceptional cast includes a few of the biggest names from Broadway. Playing hot-headed American champion Freddie Trumper, Raúl Esparza nails the troubled genius with funny F-bombs and the emotional number “Pity the Child.” At his side—although not for long—is manager, lover and Hungarian refugee Florence Vassy played by the elegant and beautiful Tony Award winner Karen Olivo (“West Side Story” and “In the Heights”), whose vocals stun with “Heaven Help My Heart.” Another time she shines is in the passionate “Mountain Duet” with Ramin Karimloo (“Anastasia”) who plays rival Russian chess star Anatoly Sergjevsky and is captivating on his own with “Anthem.”

As The Arbiter and narrator, Bryce Pinkham entertains along with the chic ensemble, as well as part of “Quartet: A Model of Decorum and Tranquility” featuring Florence, Anatoly and Ivan Molokov, a conniving KGB agent and Anatoly’s second played by Bradley Dean (“Dear Evan Hansen”). Dean is fascinating to watch as he tries to make deals with fellow double agent Walter de Courcey, a CIA operative and an adviser to Freddie played by Sean Allan Krill (“Honeymoon in Vegas”).

Although “Chess” is a limited engagement, it does set quite a high bar for the rest of the Broadway Center Stage series. Next up is the Tony Award-winning musical “In the Heights” by Lin-Manuel Miranda and Quiara Alegría Hudes in March.