Theatre Review: ‘Doubt: A Parable’ by Port Tobacco Players at Indian Head Center for the Arts 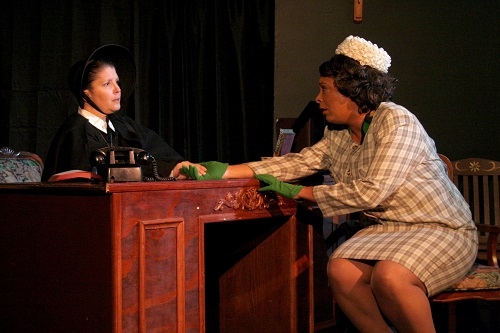 The majority of Americans have, at some point in their lives, set foot in a Catholic church or school. The sound of old hymns, the pipe organ, and the voices of nuns, bishops, priests, and fathers are not foreign to us. Most of us have sat on an uncomfortable pew at least once in our lives, and at least a few of us have wondered why nuns wear so much black and white.

For those of you who have never set foot inside of the Indian Head Center for the Arts, allow me to give you a little perspective. The theatre is compact, unlike the usual roomy Catholic church, but every inch of space is well used. The seats are plush and quite comfortable, unlike the wooden pews most Catholic churches sport. There are no stained glass windows or pipe organs (although you’d never know it thanks to the sound/lights team!). This little theatre seems an unlikely setting for a show about a Catholic parish/school. However, on February 16th, Indian Head Center for the Arts welcomed to its humble stage a team from Port Tobacco Players who left me without a doubt in my mind that from this little theatre could come incredible things!

“There are simply not enough wonderful adjectives in any dictionary to capture the true nature of this show as performed by PTP at IHCA. Every moment was gripping, and every detail was thought out carefully. I did not want it to end!”

John Patrick Shanley’s “Doubt: A Parable,” awarded the 2005 Pulitzer Prize and multiple Tony Awards, graces the stage at Indian Head Center for the Arts (IHCA) February 16-24. I had the blessing of attending on opening night, and this show certainly opened with a bang! This production was put on by Port Tobacco Players (PTP) in partnership with IHCA, and did not fail to hold to the caliber of performance PTP is known for.

First time director Matt Jones and first time producer Kyle Bailey were in charge of creating the magic I witnessed on stage, along with their team of incredible designers and actors/actresses. I would never have known, had the program not specified their newness to their respective roles, that these two gentlemen were not seasoned in their jobs. The performance was refined and every aspect of every scene was honed to perfection. They took that black box theatre with its comfy seats and simple stage and made me feel as though I had stepped into a Catholic school.

The show touches heavily on the issues dealt with in the history of the Catholic Church regarding sexual misconduct; this story targeted specifically this misconduct towards the young boys. There is a great deal of documentation that shows evidence that this misconduct was happening early on in the Catholic Church, but reported cases of the abuse were not common until the late 1980s. In the society where we find ourselves today, this reality is all too real, and I speak not only of these instances in the Catholic Church. All around us, situations like the one represented in the show are occurring, and often go unreported or are never dealt with.

The play begins with the traditional introduction of the characters and setting; a New York Catholic parish/school in 1984. We hear the ending of a sermon performed by Father Flynn (portrayed magnificently by Chris Fleming), which has some very thought-provoking remarks, and then we meet Sister Aloysius (portrayed flawlessly by Suzanne Donahue – I cannot rave enough about her performance), who is the principal of this school. She is having a meeting with one of her teachers, Sister James (portrayed exquisitely by Melody Bishop) regarding general classroom behavior. In that scene, the differences in the character of these two nuns are revealed, and one is met with the clever statement that “innocence can only be wisdom in a world without evil” (Shanley).

Sister Aloysius has her doubts about the pure character of Father Flynn, specifically with a boy in Sister James’ class, but has no proof of any true misconduct. As the story continues, we see just how confusing the truth really is, and find that “doubt is a bond that is almost as heavy as certainty” (Shanley). Will Sister Aloysius uncover the truth behind her doubt? Did Father Flynn actually engage in sexual misconduct? We meet the boy’s mother, Mrs. Muller (portrayed perfectly by Frankee Brown), and add another layer onto the already swirling sea of doubts and confusion. I left the show unsure of who to believe, and asking myself (as a teacher) what would I have done in Sister Aloysius’ shoes?

There are simply not enough wonderful adjectives in any dictionary to capture the true nature of this show as performed by PTP at IHCA. Every moment was gripping, and every detail was thought out carefully. I did not want it to end! The show, just as Shanley wrote it, is incredibly thought-provoking and clever. As PTP took Shanley’s award-winning script and brought it to life, I can find no flaw in their representation. Even the minor issue with lighting in the midst of the show, where the theatre lost power to its stage lights for a few minutes, was handled with an air of expertise. The actors continued performing in the dark until told to stop and then, once told to begin again when the issue was fixed, picked up from the exact portion of the line they had stopped on and continued as if nothing had happened.

The set (designed by Allison Clagget) was simple, yet captivating. The sound and light cues (designed by Allison Clagget and managed by Kelsey Gahan and Stacey Swickart) were perfectly timed, especially the crows. I nearly fell out of my seat when that sound cue played! The production was cast and directed to perfection. Overall, I would happily attend every performance of this show if I could, for I could never be bored of it.

So if you’re having doubts about driving out to the Indian Head Center for the Arts to see this unfamiliar production, I only have one thing to say. If you don’t go, you will miss one of the best productions I have ever seen come out of these two theatre companies. So don’t miss this one! I have no doubt that you will enjoy it as much as I did.

Advisory: Mature content is implied, but nothing inappropriate is said. Best for late middle school and up due to comprehension level and content.

“Doubt: A Parable” will play at the Indian Head Center for the Arts in Indian Head, MD February 16-24 in a partnership with Port Tobacco Players (Fridays and Saturdays only). For more show information and tickets, please see here.